The paradox of travelling this way – so far and so fast –  is that we cannot stop just anywhere.  There are many areas of civilization where big trucks simply are not welcome. Many roads ban trucks over 5 tons (of combined vehicle and cargo).  Mine varies with load and tops out at forty tons.

There are truck stops where parking is available but, those are limited and they fill up early.  There are rest stops where a truck can find safe haven.  Also limited and some with few facilities.  Some Walmarts allow short term parking but it pays to call ahead and ask.  Most retail establishments, tourist area and shopping districts do not welcome trucks, despite the fact that everything they sell came from a truck.

As we approach a destination, parking becomes a problem.  Some receivers have ”on-site” parking and that’s fine.  Others are in remote industrialized areas with lots of open street and that is good too.  Occasionally there is neither “on-site parking” nor “adjacent alternates” and that becomes a problem.  The driver must time the arrival near perfectly or be chased off like an annoyance rather than the bearer of a cargo of valuable merchandise.

On the way to Dallas, we stopped in a rest area.  This one happened to be the “Welcome Center” at the border on Interstate 40.  I must say that I was underwhelmed by this place.  There is a big  “sculpture” – a sheet-steel outline of Texas – that faces incoming visitors.  It is connected to a twin on the other side that is mirror image of a map of Texas.  So, exiting visitors see a Bizarro World version of the Lone Star State. They could have put a rectangular background in between and made both maps correct, but they chose not to. There were few picnic tables with fewer awnings.  Those awnings are ugly concrete and galvanized steel afterthoughts. There were no water fountains and limited vending machines, I’m planning to write a letter to TxDOT with a copy to Gregg Abbott. 😉

Just before we left at 4 AM I went to take a “nature break”.  As I passed the goofy mirror image Texas map sculpture, I noticed a cat sitting in a drive way nearby with his back turned to me, contemplating the forestry.  I realized that this cat was about a third bigger than the biggest house cat I ever saw.  When he deigned to look over his shoulder at me, I noticed the face of a wildcat.  He turned his back again in complete indifference to my presence.  This may have been a cougar, which are native to Texas.  We went our separate ways.  It was one of those eerie but profound encounters with nature that cause a person to ponder the nature of the Universe.

We delivered our “dead chickens” in Southern Dallas and went to Arlington to pick up a Fed Ex load. This was a relatively light load of pre-packaged meals (MREs, we imagined). From there we set out for Denver.  This one was time critical, as the customer’s name might imply.  I drove the leg from just outside Dallas op through Amarillo along US 287.  It was a surprisingly pleasant drive in nice weather and with light traffic. Not being an Interstate, US 287 passes through the middle of many small towns.  The mixture of independent small business, old homes, court houses, churches and picturesque decay provided a variety between the stretches of gently winding road surrounded by ranches and farmland.  It is far superior to the sterile views of Interstate sameness – bland uniform right-of-way, billboards, national chain retail and fast food.

Around Dumas, Texas there was a severe storm.  Winds whipped the trailer and its unfortunate light load around.  Ominous clouds dropped down and swirled funnel shaped threats. We pulled off to wait it out and the hail began. I’ll attach a short video from the cab.

We still made it to Denver on time and perfectly legally by DOT standards.  We did stretch the company policies for on-duty hours for trainees, but we got a clearance from “Safety” when it was obvious we could not make the deadline otherwise. 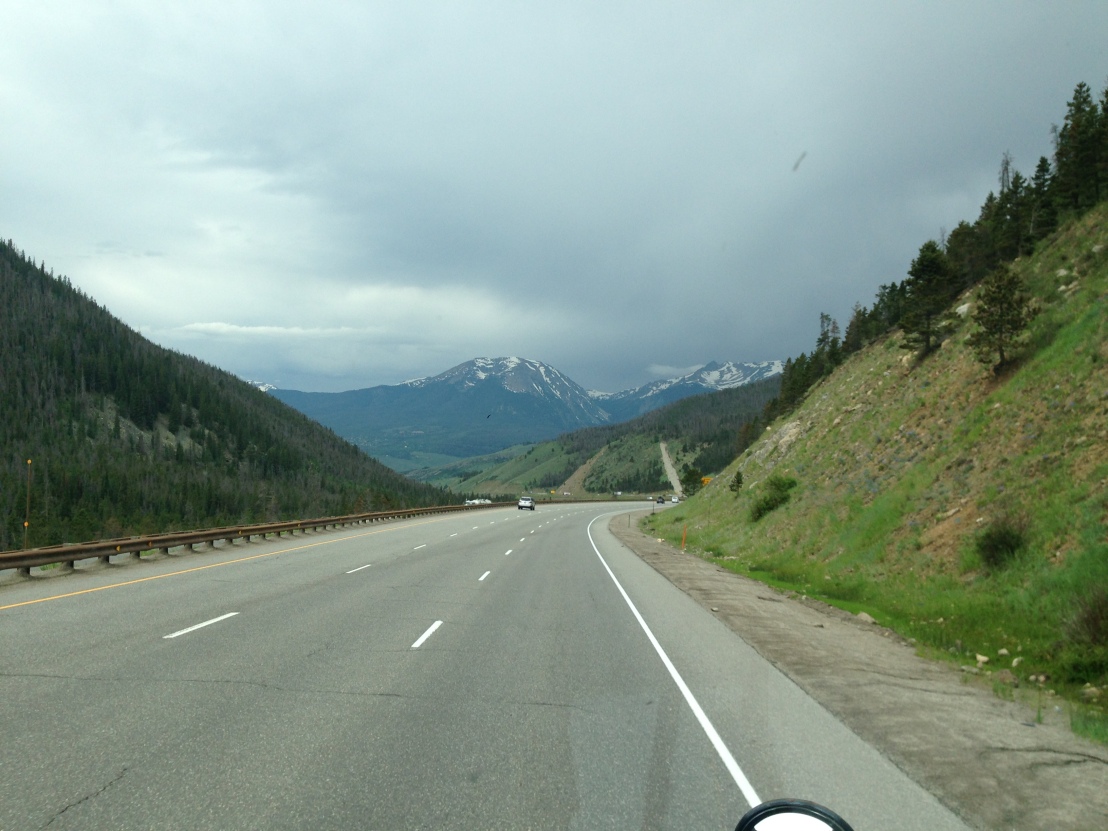 I am making good progress on backing into parking spaces and loading docks.  These feats are much harder than you might imagine. Many drivers still struggle with backing after years of driving. Still others can back 53 foot trailers as easily and naturally as you can back your car out of the driveway.

I have driven the truck over eleven thousand miles and I should be finished with training in another seven days.

One thought on “Delaware to Dallas and on to Denver”