A peaceful setting of silent trailers surrounds me as I wait to reset my driving clocks. There are no arriving and departing rigs, no noisy idling engines, refrigeration units (reefers) or auxiliary power units (APU).  These trailers don’t even have reefers since bottled tea does not require refrigeration. My APU is not needed since the temperature is a temperate 55 degrees outside.

I arrived here with an empty trailer five hours before my appointment.  This was precisely because my fourteen hour on-duty time was down to two and a half hours.  As long as I don’t leave the shipper, I can move the truck where it needs to  be -staging area, cargo door, parking yard – and not violate my rest break that will regenerate my 11 hours of driving time.

A shipper’s property is like the “Home” that we used as children during games of tag.  Usually it was a tree or a parked car where, as long as you were touching it, you could not be tagged and turned into “IT”.  It was even possible to make chains of hand-holding gamesters to who are “safe” by virtue of “electricity” and despite being as much as ten feet from Home, none could be transformed into IT.  That part doesn’t translate in the analogy, but I remember it well.

The current load is bottled ice tea bound for Missouri.  We will catch up with it later.  Now back to New York.

The Beef Load to Brooklyn: 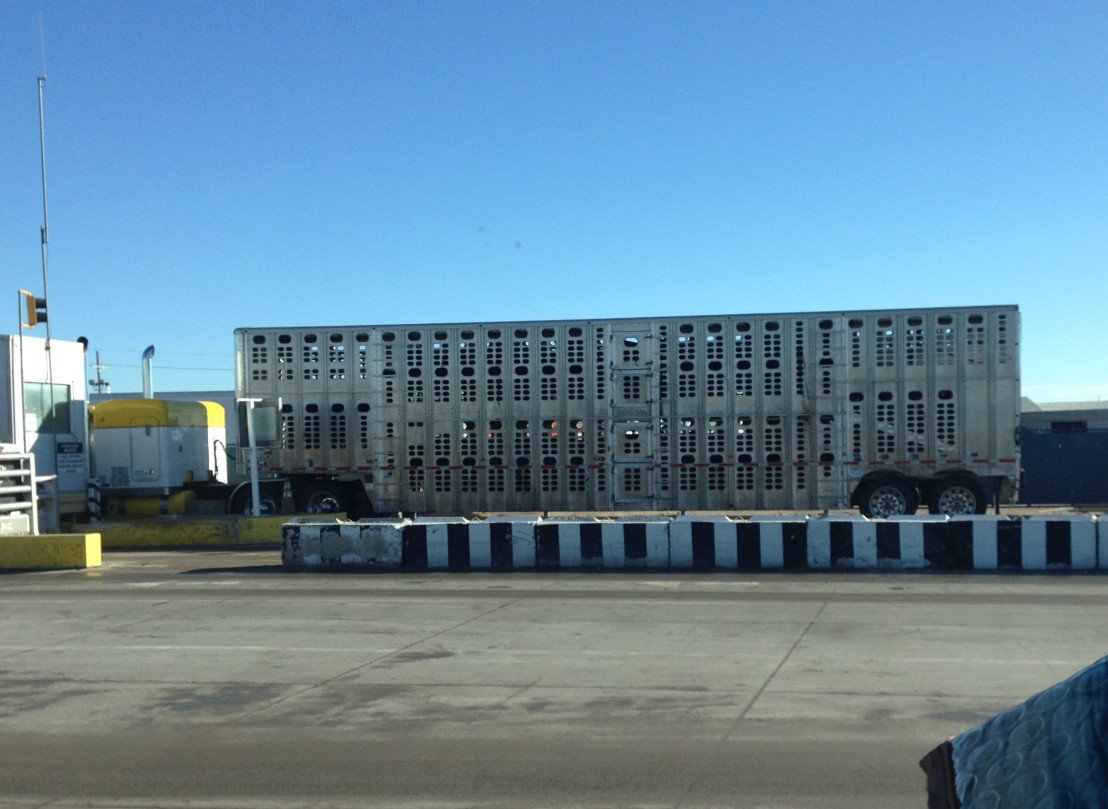 While waiting for my trailer of beef in Kansas, some participants in the beef process arrive. This sort of truck is derogatorily know as a “slaughter buggy”.  This reminds me of a definition of Involvement and Commitment.  Think of Bacon and Eggs for breakfast.  The chicken is Involved.  The pig is Committed.

At the Shipper’s beef plant – around midnight – I am assigned a “pick” trailer that I discover has some sort of a mutant mechanism for sliding the tandem trailer axles.  Every other trailer has an easy push-pull air valve that is simplicity itself.  This one has a giant lever that will not move unless (we find out) the truck is in motion.  For the solo driver this presents an obvious problem.  When I called this problem in to Dispatch, they told me to drag the trailer to a shop nearby and wait until it opens at eight AM.

I finally waved down a Yard Tractor and requested the assistance of its driver.  He speaks only Spanish, the universal language of Kansas Beef Plant Labor.  My rather eclectic education that included elementary school immersion in that language is again appreciated. Together we manage to slide the axles seven steps to the rear.  The tandems were carrying a 1900 pound overload and without that adjustment I would face a multi-hundred dollar fine at the first weigh station.  I tipped the “Joven” $10 and I have billed the company.

He thanked me and then -out of the blue – this kid complemented me on my Spanish.  I always feel that my vocabulary is rusty and lacking, so these comments (which are frequent) take me by surprise.  I think I have come up with an explanation, though.  I worked with many oil field managers in South America and most were from Colombia, Peru or Bolivia, where they speak very formally.  All of them were better educated than Yours Truly and  I wound up imitating their speech patterns.

The habit remains.  For example, when I told the Yard Driver about the problem, I did not say, “This thing doesn’t work.”  Instead, I said, “The mechanism does not function as it should”.  😉

On the road to New York, around Kansas City a fog set in, reducing visibility to under a quarter mile.  I decided to get off the road.  As usual, this is easier said than done.  A half dozen exits go by with no indications of a rest area or truck stop to offer parking.  Finally, I give up and take the next exit blindly (almost literally, by then).  This always seems to end the same way.  I find myself on a deserted road whose shoulder soon disappears.  No conveniently empty parking lots appear out of the fog. Onward through the fog to a T-intersection.  No signs, no lights, no indicator of civilization – and no place to turn around.  After a few more intersections loom out  of the fog (and I toss a mental coin to decide which way to turn), I find an industrial looking place to the left and turn down that narrow road.  Finally a short stretch of shoulder, unpaved but firm enough to take the truck.  I pull off and shut down to await the dawn.

Returning to the highway in the morning, I find that just after where I exited is a sign that reads “Rest Area – 1 Mile”.  The fog is still there, but visibility has improved marginally.  The cars that pass all have their lights on – except, of course for the  silver (i.e., fog-colored) vehicles.  Their drivers don’t need lights because they can see all the other cars that do have lights on. 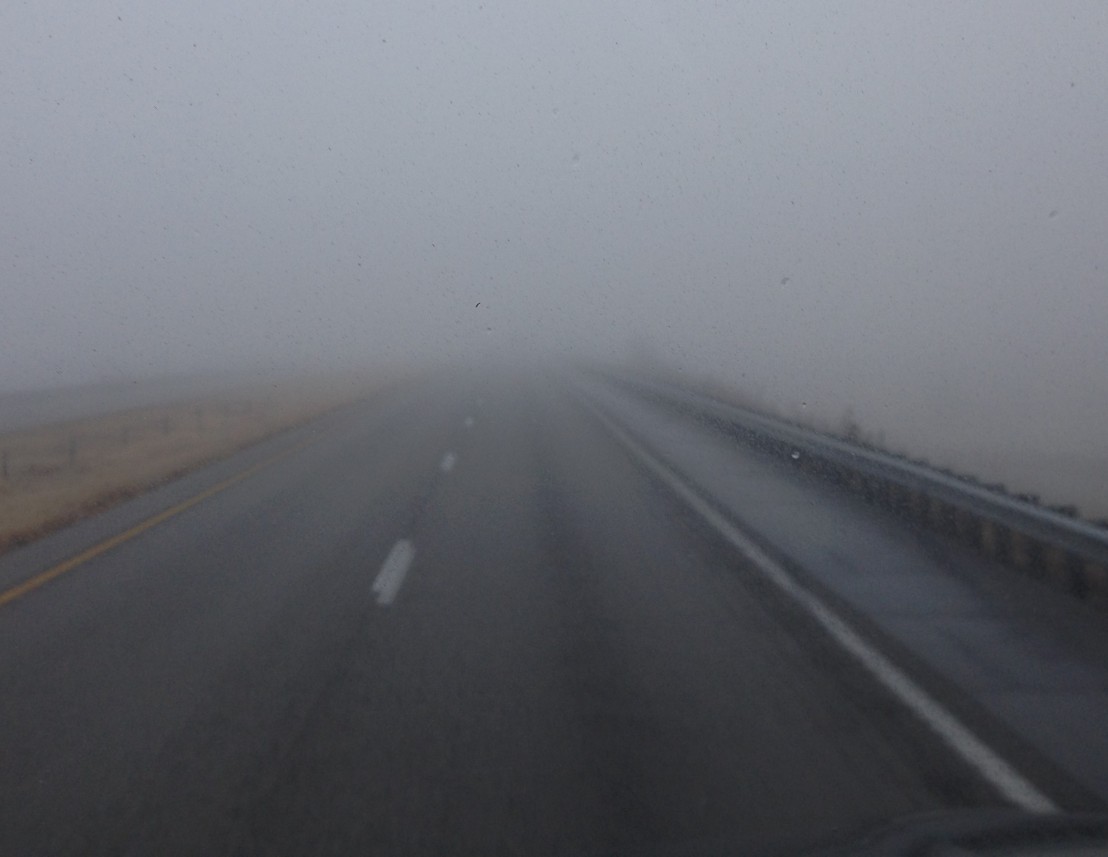 A Fog-colored car with its lights off.

They pay you $75 if you have to deliver in “the “Five Burroughs”.  If they were to multiply that by ten, it would begin to be appropriate compensation. My trip to Brooklyn began with a special lecture on the Entry Routing where I was waned of all the Impending Doom to be expected.  I am told that this routing can not be incorporated into the navigation software.  I have been involved in software development for thirty five years and I know that to be a Myth..but I digress.

The Verrazano Narrows bridge is undergoing road work and the lanes are about 18 inches wider than the truck.  It is only two lanes, unlike the linked video.  There is a Jersey Barrier that looms where that right-most dividing line is seen and I am constantly inches from collision.  I navigated the obstacle course and did not dare attempt photography while I struggled to maintain a nine inch margin on both sides of a hurtling 40 ton truck.  Another driver clued me in to the answer:  Take your half out of the middle.  Straddle the stripe.  What are the little toy cars going to do – run you off the bridge?  This is New York and you can get clean away with such behavior. I did so on the way out.

Arriving at the receiver, I find trucks double-to-triple-parked on a six-lane street.   Backing into the cargo door means blocking every empty lane on the entire street.  I say empty because that last lane has a parked car in it just to make backing more difficult. 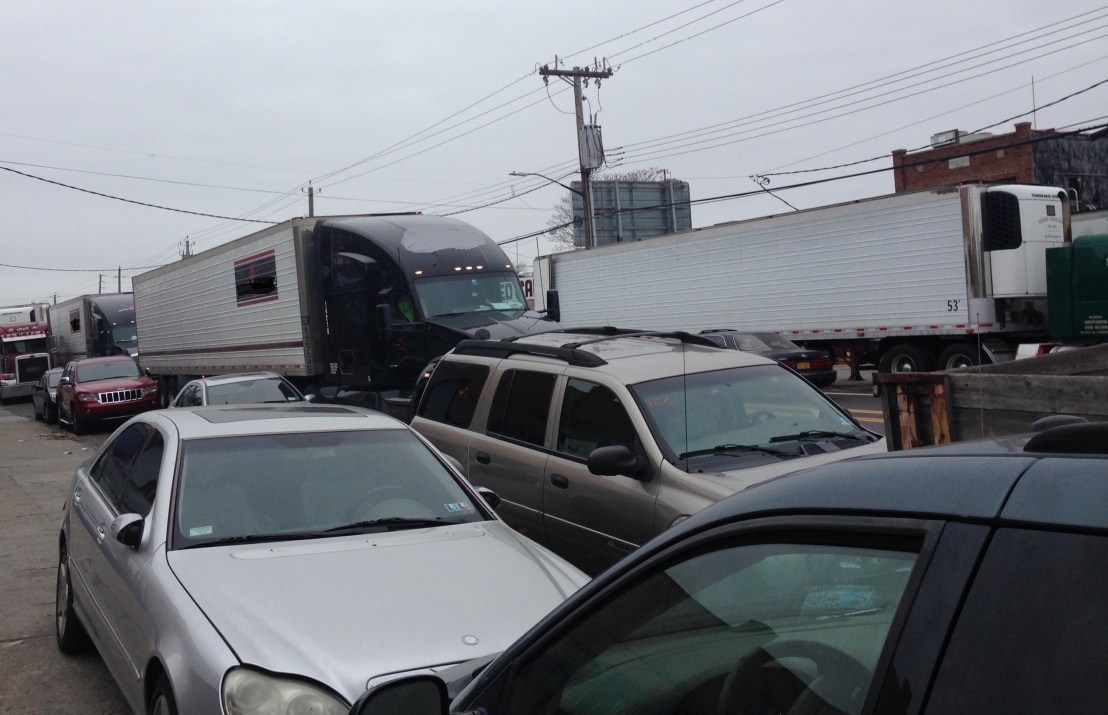 This is not a traffic jam.  Every vehicle in the picture – save one (it’s orange rear license plate is visible) – is parked.  The two cars in the foreground are on the sidewalk.  My truck and the other black-cabbed Company truck are parked in the dedicated bus lane.  It was like this for hours.  The Receiver’s warehouse is behind the truck at extreme right.  They unload chicken and pork first – I carried beef and was second of two.

Anywhere else, this would be considered a safety violation worthy of termination.  Here, we can fling down the safety manual and dance upon it…because it’s New York!  Another completely unjustified double standard.

The receiver had a short staff because it was the day after Christmas.  Knowing that in advance, he still scheduled all these trucks.  The delay cost me a day of driving.  Suffice it to say that the $75 bonus was insufficient compensation.

The Tea delivery went well and was nearly done.  My eight day clock had dwindled to about 5 hours,, so a 34 hour break was unavoidable.  I was hoping I had just enough clock to get to a carefully researched truck stop that would allow me to do a “Denver-like” mass transit tour in St. Louis.  From the Pilot near downtown, it would be possible to take the bus to the Saint Louis Arch.

Sight of local interest within reach of the “selected” truck stop.

My 14 hour duty day was ticking down and knocking at one hour by the time I got my paperwork.  The selected location was just over an hour away – if no traffic or accidents.  The trouble is that I need to log a 30 minute Post trip inspection and the hour I had left on the day was total duty time, not just driving time.  The downtown Pilot was out of reach, so I had to choose a closer one. 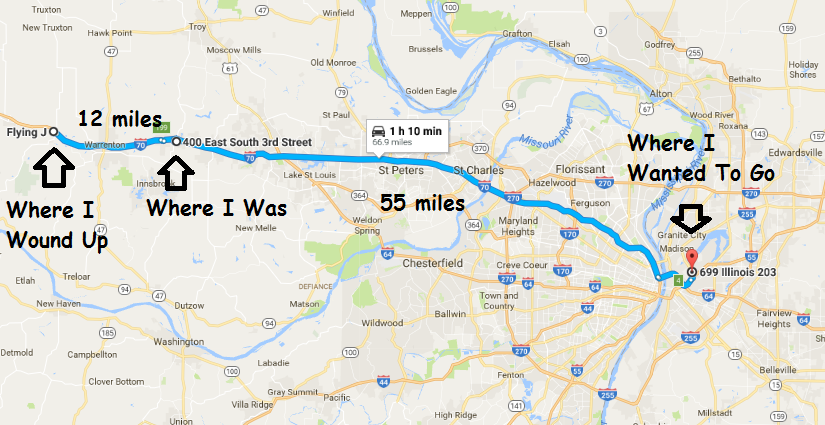 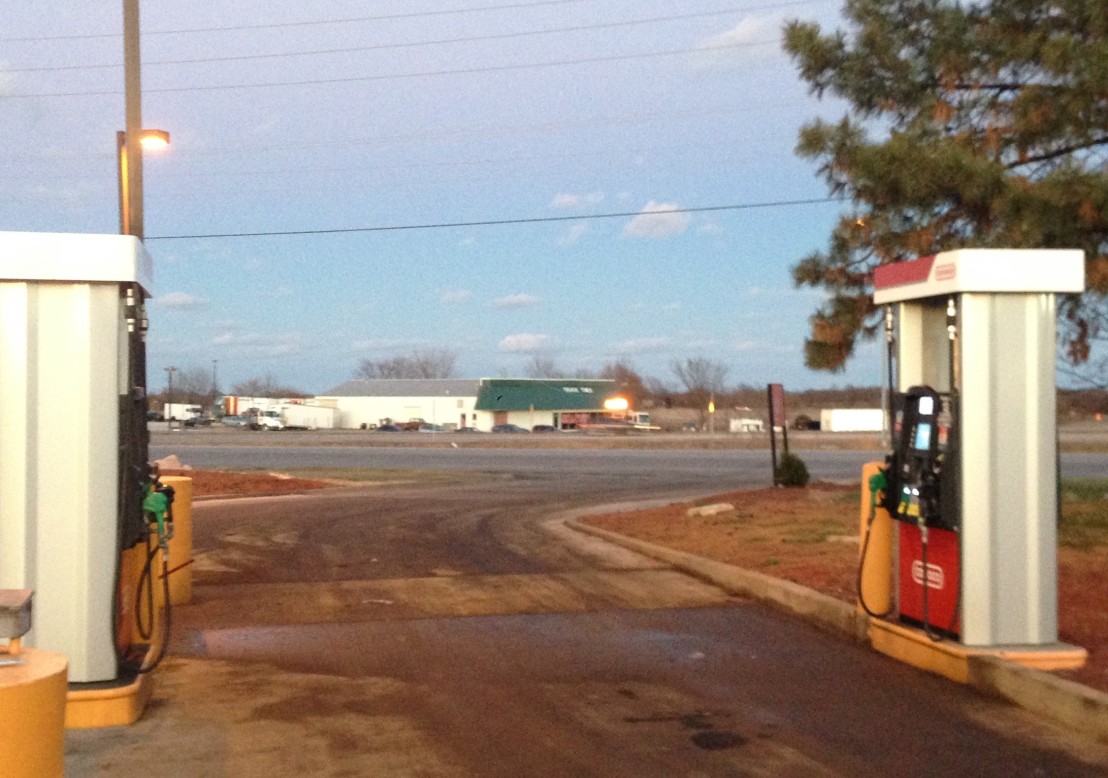 Fortunately, there are some local sights here, as well.  Here is the Star of the Show – a truck tire shop.