The current voyage started in the “wee, small hours” and it continues that way.  I left at ten PM from a rest area in Pennsylvania and I parked here “for the night” in Effingham at 10:11 AM.  I passed through Indiana early this morning and every time I see the border sign, I think of a line in a movie, uttered by Sean Connery.  Specifically, this one.

Then, almost immediately, this song comes to mind.  Shortly thereafter, I think of Indiana University which was the Alma Mater of Luther, a friend and college roommate, back in the 1980’s.   So you see, my thoughts ramble around when there is nothing much on the radio.  You couldn’t really call it “free association”, since there is a common theme. This sort of thing happens all the time in my head.  It is a blessing, and a curse.

Once again, provisions in the ship’s galley have dwindled.  Only that lonely can of Spam, some peanut butter and a single flour tortilla remain.  But, all is not lost.  Only 22 miles from here is a Super Walmart in Vandalia, Illinois.  When your vehicle is 65 feet long and weighs 40 tons, shopping is hardly ever “spontaneous”.  There was once in Joliet that I stumbled upon a Sam’s Club.  But even then, I had to ask a Receiving clerk if she thought I could get away with parking there.  There had been this sign – you see – that said something like “Don’t even think about parking your big, honking truck here!”.  The saving grace was the other 2/3s of the “strip center” that was vacant.  I calculated that there were 160 empty passenger car spaces and I took up only eight, for a half hour or so.

This Walmart in Vandalia, I have researched with Google Earth and my iPhone mapper. It is right off the highway, open 24 hours a day and I  have budgeted an hour for shopping in my trip plan for tomorrow. As you see below, there is a dedicated truck parking area.  That may be full of over-nighters by the time I get there, but at three in the morning, the passenger car lot might have 8 spaces to spare, no? 😉

I have developed a theory of trip planning that guides my choices of where to stop and when to shower.  Showering is also something that cannot be spontaneous – mainly because it involves shower “credits” (which are currently all on my Pilot/Flying J card).  If I travel overnight and need to settle in the mid-morning, no problem finding anchorage at a truck stop of the appropriate brand.  If I am stuck with late night arrivals, there is no chance of parking in truck stops and wait times for showers can be an hour before midnight.  In that case, rest areas are where I settle and showers can be done at midday breaks or during fuel stops. Last night was an exception to the rule when I found parking at a Pilot in Indiana at 5 AM and grabbed a shower there.

Word comes of the next assignment.  Iowa to Schenectady, New York.  Here is a “Binged” picture of Schenectady. 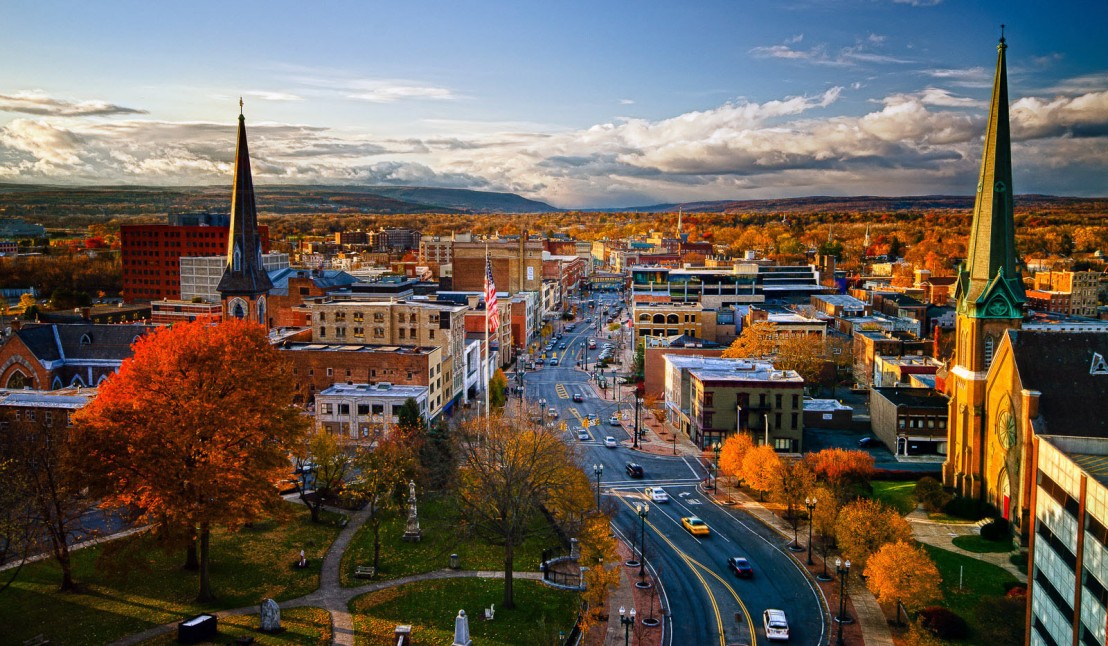 This is in “Upstate New York, a good bit North of “The City” and might just as well be on another planet – a much saner, safer and far more scenic planet.

You might imagine that I get to see things like this all the time.  That turns out not to be the case.  What I see is an exit sign on the Interstate that says “Schenectady”.   The Receivers are usually out-of-town in Industrial Districts – which are exactly as “picturesque” as the name suggests. 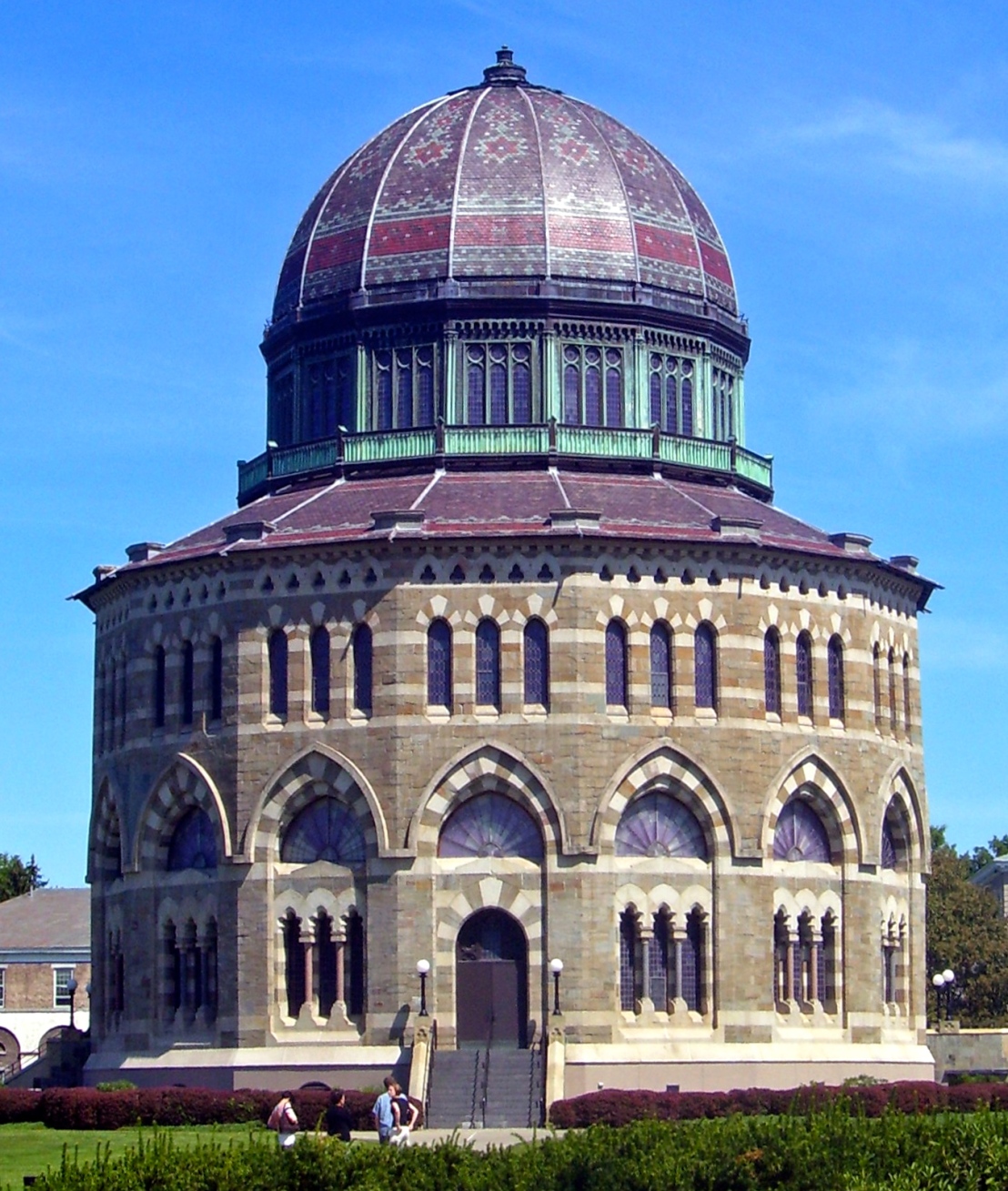 This Nott Memorial Hall at Union College, in is Schenectady.   An interesting Architectural accomplishment.  I won’t come anywhere near this, either.

Even the Industrial District of Schenectady will elude me, it seems.  The trip was canceled since it was two days late at the outset and another impossible trip for a solo driver as scheduled.  The new journey will be from here to Los Lunas, New Mexico.  Today has been a confused combination of waking, driving, sleeping, unloading, driving, sleeping, loading and now, parking the rig while still on the shipper’s property since I won’t be “Street legal” for another 5 hours.  The day started at One AM and here I am at 8:20 PM with no idea if I’ve slept enough to warrant being conscious.  More sleep seems to be the sane thing to do, even if I am on what the French once called the Qui Vive.  So, if you will excuse me…

I am waiting for the laundry to dry and I could probably do that in the truck.  However, I have seen plenty of the truck – as you might imagine – and I am hanging out here for a change in scenery.  The appointment with the Receiver is at 14:15 MST and the Distribution Canter (DC) is about 30 miles away. 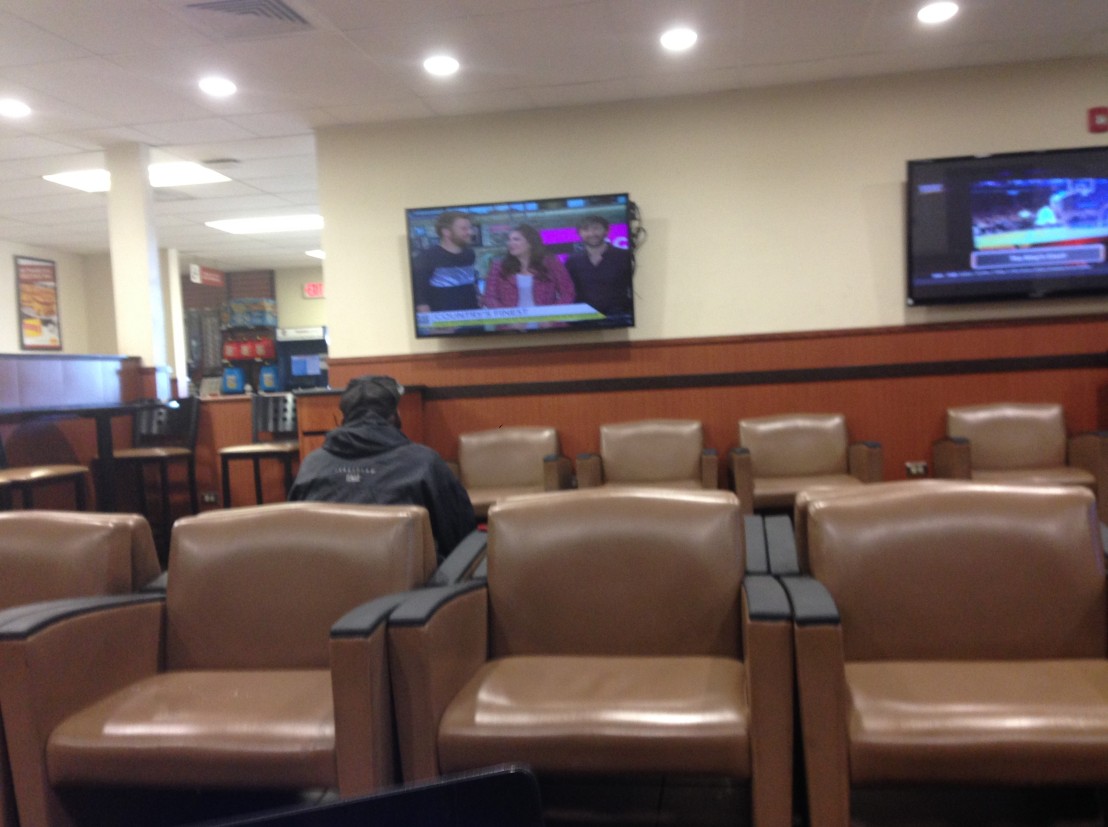 This trip began from Mattoon, IL (which I repeat because I like the name).  My drive time was renewed at 2200 and I managed to roll by 2300.  The first stop made it  clear that I had not slept enough, so I set the timer for an hour and hit “the rack”. After that, sleep was back in its box for the remainder of the drive.  From Mattoon, I made it to a fuel stop in Newton, Kansas. That was 550 miles and a respectable day’s drive.  While parking was abundant and easy, I still had an hour and a half and no reason to stay in Newton, but extensive online research failed to turn up a truck stop or rest area within reach, so I stayed put.  Yesterday’s drive was longer than usual because I wanted to reach this particular truck stop.  The destination was familiar, the weather was nice and the traffic was light.  I made the “J” with 22 minutes to spare – hardly exciting.

There is a Truck Culture Phenomenon in Kansas and surrounding states.  There appear these blazing islands of light that shatter the midnight darkness. The pictures come out blurred for that reason.  I’ll try to photograph one of these in captivity. 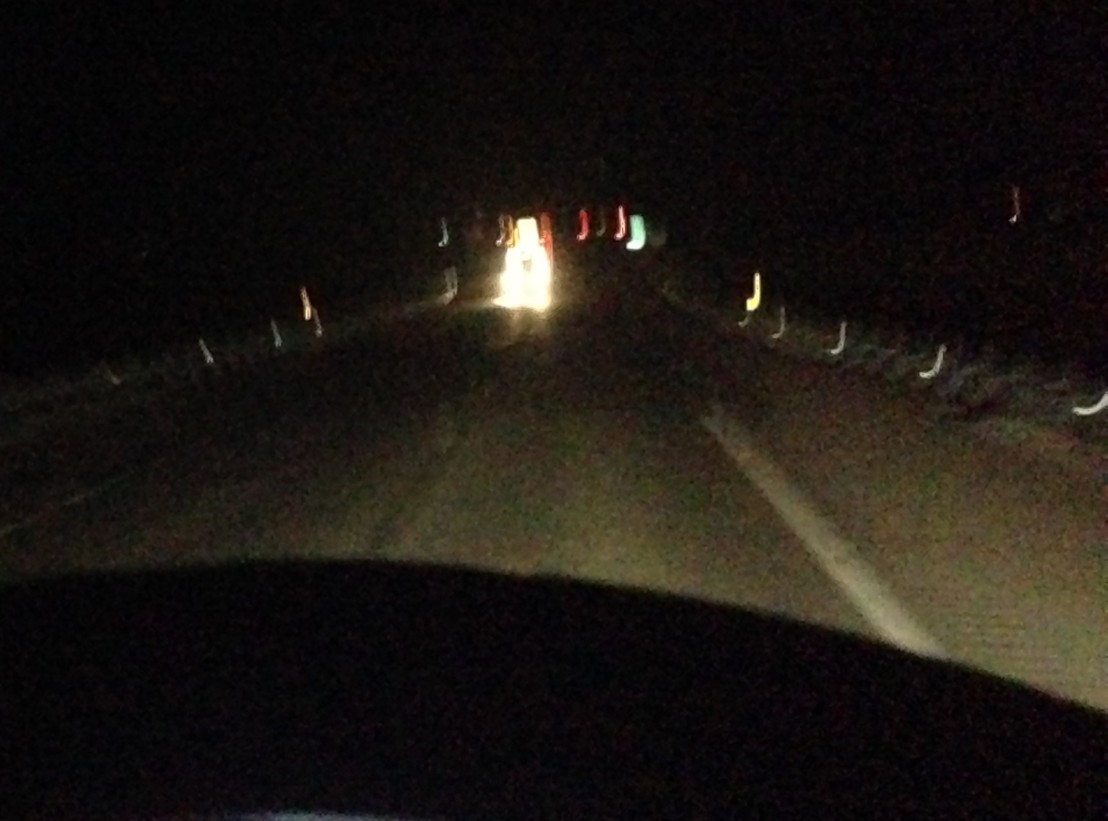 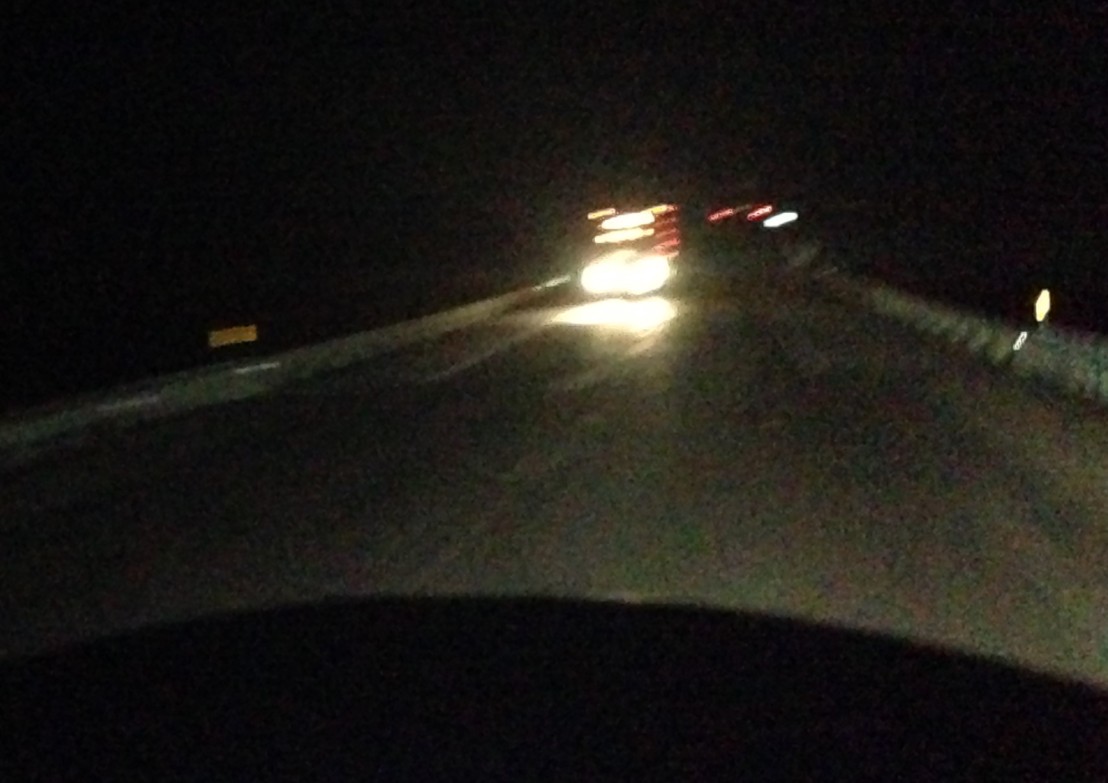 A bit closer and you can see that this is a “Slaughter Buggy” taking live cattle to beef plants.

There was one incident worthy of mention.  It looked like one of those Compact SUV (CSUV) things, inadequately pulled off on the shoulder.  The driver’s side tires were on that white line that separates the shoulder from the road.  In normal driving, my trailer wheels pass – at most – about two feet from that line.  An interstate offers the fast lane, to which I can flee to avoid these problems.

This was a US highway – one lane each way.  While the shoulder was wide enough, the CSUV driver was not sufficiently talented to realize that everyone in that vehicle was in mortal danger.  There were an additional three feet of unused pavement on the right and a firm grassy shoulder beyond.   Did I mention that this was in a no-passing zone? I was slowing and signaling to avoid this situation by easing over the center line, when I saw the doors of the CSUV open (all the way!) and passenger and driver strolled out casually, to trade places. CSUV Driver was now just right of center in my lane.

It became obvious that a truck in the opposing lane would arrive at the same time I did.   Four-way flashers activated, I slowed dramatically and aimed the rig at the opposing lane despite the double stripe.  I found the gap in opposing traffic and passed the Fools without collision, just as the doors closed.  I did blast the airhorn at them, in an attempt to make them aware of their airheaded, suicidal idiocy.  Sadly, I doubt that any notice was taken.

Other than that, it was an uneventful trip. 😉

The relentless clock is not to be denied.  The laundry is done and folded, my shower taken and the appointment at 1415 looms.  The countdown to launch will start soon.

One thought on “Not Schenectady”