The road to Dallas (Interstate 45) is terribly boring when one has seen it a hundred times or more.  When I was of single-digit age, the road to Dallas was US Highway 75.  Generally speaking, it consisted of one lane each way (with occasional truck climbing lanes) that passed through major towns along the way, usually on their Main Streets. The highway still exists and I noticed for the first time on this trip that it has become a Texas Highway – still with the number 75.  The route will cost about 40 minutes or so, but it is far more interesting than Interstate 45.

The road is still reasonably well maintained and the speed limits are 70 to 75 except, of course through towns.  It is possible to pick up Texas 75 in Conroe, but it is slow going with many traffic lights until Huntsville.  From there it passes through Madisonville, Centerville, Buffalo, Fairfield and Streetman.  Just after Streetman, the old highway has disappeared under a recently created lake.  The best strategy at that point is to rejoin I-45.

Former First Lady Ladybird Johnson made it a pet project in her later years to decorate Texas highways with wildflowers.  Springtime can sometimes generate some impressive fields of color.  I found only a few less-than-spectacular examples on this particular trip to Dallas.  These are Bluebonnets, the official “State Flower”.

Every driver, upon entering the Gates of Purgatory is handed a list of tasks that must be accomplished before he is allowed to again navigate the highways and once again earn his pittance.  Mine was mercifully short.  An accounting of safety violations and a lecture on the subject was accomplished.  A training session for new reporting software took only 20 minutes or so.  I signed up for a company car to go and buy a pair of shoes.

The tank was near empty – as my luck requires – so I stopped in to add fuel.  On the gate pass is a caution that re-imbursement of fuel cost requires a receipt with the number of gallons listed.  Now, why would that be there?  Because it happens that receipts don’t have that information?  A preponderance of caution compels me to first buy one gallon of gas, just to see what kind of receipt I get.  There was no receipt at all forthcoming and that ended my responsible attitude that compelled me to buy fuel.  One gallon was more than I used on the short trip.  So see? – I really am responsible. 😉

Shoes were needed because, about at Huntsville, Marilu called to tell me that I left my working shoes at home and was driving with casual dress shoes instead.  Glance down…sure enough!  I arrived at Purgatory to schlep all the groceries a quarter mile across the parking lot in two trips.  I am faced with the persistent problem here in Purgatory.  That is, there are about three hundred trucks – all the same color and with the same markings.  I estimate that half of those are Kenworths, like my own truck.  If it were only the drivers that were inconvenienced, I would be walking the entire yard looking for my license plate or the unit number on the side.  But, mechanics also need to find the trucks and so there is a touch-screen computer in the garage waiting room that uses GPS to find trucks by their number and display them on a map.  Placement of the Beach Scene windshield shade makes relocation of the truck a snap.

Once the goods are in the truck, it is time to fetch Benjamin from college so he can drop me off and take the car.  Farewell to Family and back to the Road again.  My tasks are complete and I am ready to drive, but leaving town on a Friday afternoon is a really bad idea.  This place is depressing and  I would prefer to be on the road again, but waiting until the traffic has disbursed is well worth the extra time in Purgatory.  So, rather than appealing to Dispatch immediately, I will wait until Sunset. A nap is in order.

Just now, Jill the Navigation Computer breaks a week-long silence to tell me that two “Important Messages” have arrived.  Weather updates.  “Scattered severe storms and tornadoes with wind gusts to 70 mph.  And, “local flash flooding”.  No hurry to rush off – none at all!

I have a load assignment from Dallas to Denver and I can pick my time to start.  The hours between Midnight and four AM are considered “The Danger Zone”, but I find them to be ideal – especially when leaving large metropolitan areas.  After ten or eleven hours, the day’s driving is done and parking abounds in both truck stops and rest areas.

From Denver, it is probably back to Kansas for another meat load.

First noticed in the Utah summer, these fences puzzled me:

Those of you from colder climates may recognize these immediately, but warm-blooded folks like myself are mystified.  Not  the barbed wire fence, whose function is clearly livestock management, but the plank fences behind same.  They are discontinuous so cows can walk around ‘em easily. 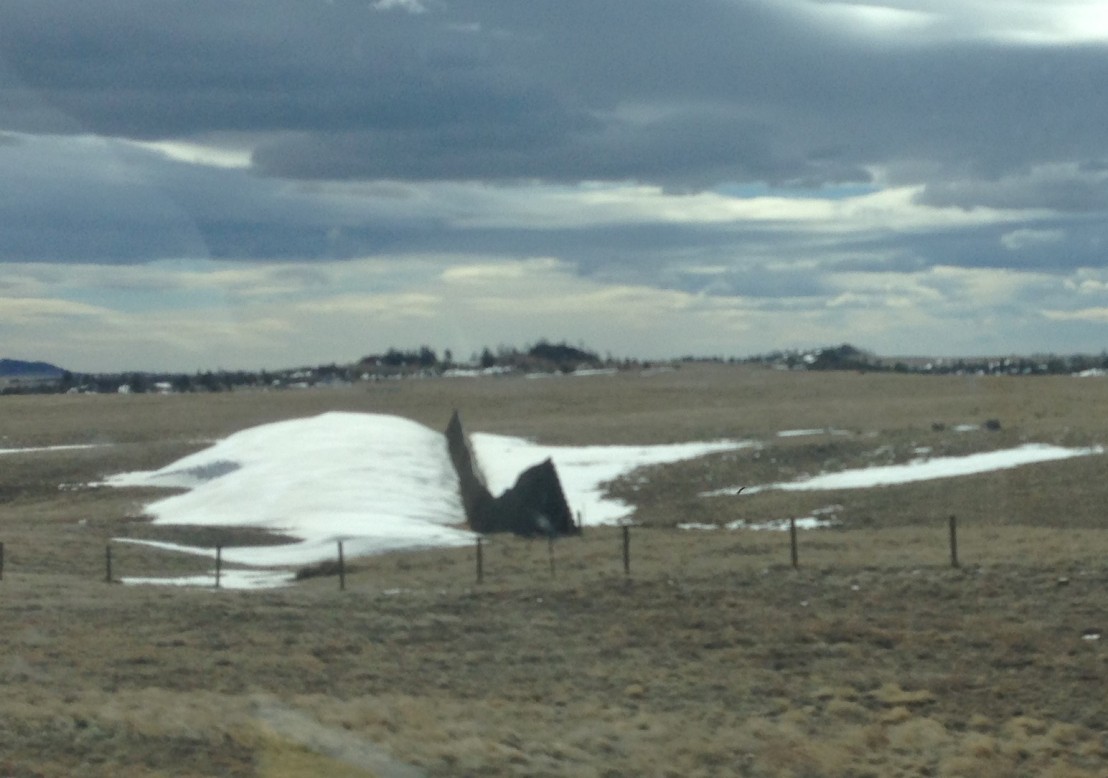 I thought at first that these were merely to keep snow from drifting onto the highway.  In March, the true purpose becomes apparent.  As this photo in Wyoming shows, the fences accumulate snow at such a rate as to make a “glacier” that lasts till Spring.  As the glacier melts, it becomes groundwater – a valuable resource in the arid climate.  It may be that enough can be sequestered to fill stock tanks.  Perhaps that is why this one spans a depression in the landscape.

I still retain one shower credit on my Pilot/Flying J loyalty card, having seen five others expire during the five days of home leave and subsequent consignment to Purgatory.  I am determined to make use of same, but the waiting list is 6 or more every time I enter the building.  The usual tactic of waiting until the wee hours of the morning will not serve here because I am afraid that midnight will bring the subsequent disappearance of the last bathing opportunity.  I am reminded of Porky Pig’s wash-time song, “Singing in the bath, ba, bath, ba…Shower”.

The road today brought a few points of interest.  I have been looking for examples of  what I call “Powerline Bonsai”.  It is frequently noticeable along old highways where trees have been pruned back to avoid the powerlines for decades and wind up with rather bizarre shapes.  There were some examples along Texas 75,  but I was unable to capture them on film*.   Today however, I found an even more interesting example of Powerline Bonsai En Absentia.  That is to say that the trees had undergone the eerie transformation, but the reason for their peculiar fate has now been removed.

Powerline Bonsai (PB) En Absentia.  The poor tree in the foreground has had its core foreshortened, leaving it to resemble a man with very long arms gesturing desperately for help.  Its immediate down-road neighbor is a victim of a unilateral barbering.  Obviously this section of highway  has undergone directional division, the opposing traffic consigned to the new road seen at left.  The new powerline is visible as are potential future PB victims seen between the first two elderly examples.

Other points of interest along the road today include a massive funeral procession.  This might have been for a Hell’s Angel of some prominence, since it featured an abundance of motorcycle enthusiasts and some imaginative automobile modifications.  These days, Funeral Processions are less distinct since a series of vehicles with their lights on has been made routine by automatic headlights.  The usual sign of respect at a procession passing is to pull to the side of the road and wait for its passage.  Alas, that would be what is called a “Sitting Duck” position for my truck and is only allowed in a breakdown and only with immediate deployment of safety reflector triangles or road flares.

There was a well-attended horse show that failed to photograph well and a coal train on an overpass that caught my interest but did not impress visually enough to include pictures.

Again the shower beckons.  I believe I will join the backlog, after all.

Pilot has instituted, in some stores, an internet hegemony that presents my iPhone with a sign-in screen for their “paywall” wireless service.  This means nothing to read while sitting in the fast food zone that the drivers lounge has become. Don’t worry, they converted a janitor’s closet into a driver’s lounge.  I would go there, but all three chairs were taken.

Being the ever resourceful Renaissance Man, I fell back on the Olde Ways – I read a paper magazine.  Astronomy April 2016 – it has been gathering dust on my shelf since that date.

One thought on “Texas Highway 75”