The view of the beef plant in Grand Island, Nebraska.  The guard shack is visible out the driver’s window.  That is a livestock trailer delivering the raw material.

There is some good out of the ordeal.  I applied for a driving position with another company online and they called me back a few hours later for a preliminary interview.  They have my work history and credentials and it sounds like a good fit.  Better pay and better hours and pretty much the same kind of work.  They have a headquarters in Houston.  They will call me for a more extensive over-the-phone interview when my obligation to The Company is over – about May 7th.

I was supposed to leave here by 1300 and I began drinking coffee at 1130 since I had made every effort to sleep as much as possible for the previous 16 hours.  Now it is seven hour later and the truck has not moved.  I tried to take a nap and…forget it.  I am up for another six hours at least. There was a graffito poem in the 70’s that you might see in truck stops.  I only heard about it., third-hand.

Here I sit with a broken heart

It is from the bad old days of amphetamine abuse in the trucking industry.  I am fortunate that I have only a six hour stretch of idle wakefulness that I might have to endure.  The poor wretch in the poem was about to be awake for two full days while his truck was in the shop.

Checking every hour with the guard shack has accomplished nothing, but that is where the restroom is, anyway.

The trip is a good one, from Grand Island to Oakland California – over 1500 miles – mostly along Interstate 80, where there an overabundance of rest areas and truck stops and long stretches of plains, but it does take me through Donner pass in California – an impressive mountain adventure.  More on that later!

The Truck has been motionless for 41 hours now.  I supposedly  will receive some $12.50 per hour for about 8 hours of that.  Otherwise there is no profit in these days of boredom.  I could have waited at the local truck stop or parked at the Wal  Mart all this time, but I had just shopped at the same Wal Mart and I have no shower credits left for the truck stop.  Here, at least there is a restroom and I can check – in person – with the clerks who will supposedly assign me the trailer. Every shift knows me by sight now.  The overnight guy tells me that some drivers spend as much as three days.  I am “knocking on that door” today.

Driving through Kansas to get to the Meat Plant Vigil, I caught a crop duster in action.  My father’s older brother, L.D. was the first crop duster in Texas after an Army Air Corps / Air Force career that spanned the duration of World War Two and Korea.  I have seen his recruitment data.  Enlisted in 1940 at the age of 17, his occupation is listed as Gas Station Attendant and his education as one year of High School.  He entered as a buck private and retired as a Major.  According to the family oral history, he flew 110 missions, first in B-17’s in Europe, then B-29’s in the Pacific.

The Cold Front in Kansas. The bank of clouds stretched from horizon to horizon.

Still in Kansas, I passed a windmill blade. It would not fit the camera, so I have made a “panorama” of two snapshots.  These blades are some sort of lightweight composite.  I tend to think that a steel blade this long would be too heavy for the vehicle you see here.

Estimating from the tandem separation (mine is 4 feet and 4 inches)  the total distance from front bumper to the end of the photo (where the blade has not yet ended) is 145  feet.  The trailer I tow is 53 feet long and the combination of tractor and trailer is about 70 feet.  Not shown are the leading and trailing escort vehicles that are needed to clear the way at entrances and exits and block traffic along curves that are anything less than “gradual”

More windmill parts were on the move.  This lower tower section was just clearing the intersection as I left a truck stop (offstage right)  in Dodge City Kansas.  Notice that the tower section is not carried on a truck bed, but rather clamped between the front and rear dollies, thus becoming part of the trailer structure.  This was obviously for clearance height reasons, as the traffic lights demonstrate.

The legal load limits per tandem axle is 34,000 pounds.  At that rate, the whole vehicle might weigh 428,000 pounds, including a heavy-duty tractor.  The vehicle I drive had better not weigh more than 80,000 pounds.

The rear section is actually steerable.  Once, I saw an operator with a remote control, on foot behind the rear axles, guiding such a structure through a fuel island.

The complete vehicle has 13 axles (one off-stage left) and a total of 50 wheels.  My truck has 5 and 18 respectively.

I am on the way from Nebraska to California.  There is snow here.  It accumulates on the truck, but the pavement is warm enough to melt the snow. Weather radio tells me that winds are calm and temperatures are in the upper 20’s.  Light snow and fog are reported.  The APU heater has failed yet again and I am idling the truck engine off and on to warm up the Captain’s cabin.  The mechanics have worked on the heater four times since I have been driving this truck.  Other Kenworth drivers have told me they have the same chronic problems with the heat.  I don’t have any anti-gel left and worry about the fuel  There is a Pilot nearby and I can stop and buy the stuff tomorrow.  They obviously did not get the memo last month about “Spring”.  I hear a snowplow scraping around the parking lot.

The Snow situation at the Visitor’s center.  Snow, rain and fog followed me in the morning until just after dawn. 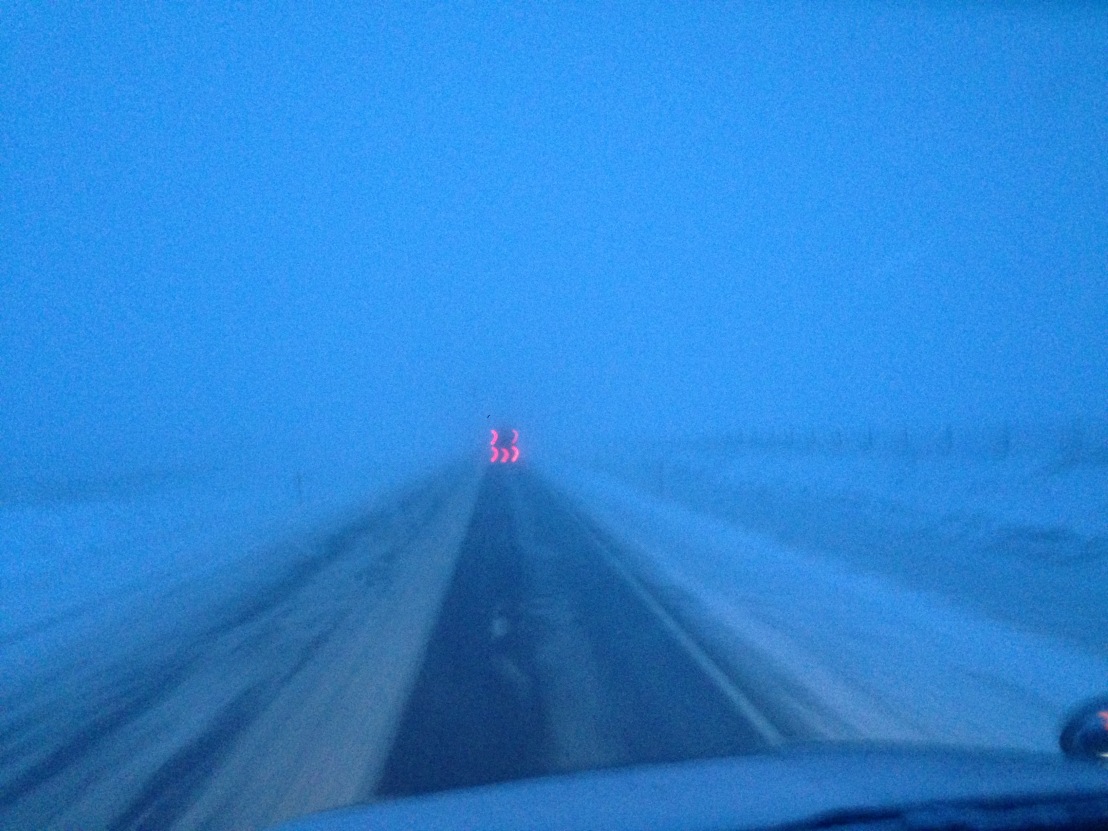 The weather improving with the dawn.

The meat plant “interlude” was terminated after 44 hours of “stoic vigil”.  Only twenty two hours after the supposed “deadline” when they are contractually obligated to hand over the load.  I will supposedly be paid $12.50 for eight of those hours.  Don’t worry, this handsome “windfall” will not sway me to become an Idle, Rich Playboy.

My electric kettle that heats water for instant coffee has “bought the farm”.  That was why I invested in a microwave oven.  I had no container for the water, so I just used one of the plastic peanut “jars” that Sam’s sells me. I fill them up at rest area water fountains. When you consider the cost of bottled water and the time it takes me to fill up the nut jars, I actually earn more per hour filling these than I do while driving.  On the down side they are not, I think, well-suited for microwave cooking, as the before-and-after photo below will show.

Before (left) and After (right) microwave duty.  I have purchased a large Pyrex measuring cup to take up the task.

I was on the road to an early afternoon stop near Oakland in preparation for a noon-time delivery.  I stopped here for fuel and a thirty minute break.  As I was looking up a truck stop for the end-of-day, I got a call to swap loads with a driver 30 miles West.  I’ll break for ten hours here and meet him there around midnight, so I can deliver to San Francisco tomorrow morning.

This “modern” sculpture adorns the salt flats west of Salt Lake City.  I am not sure whether  the three “shell pieces” surrounding the work are part of the art or evidence of vandalism.  That may be the reason the fence was added. 😉 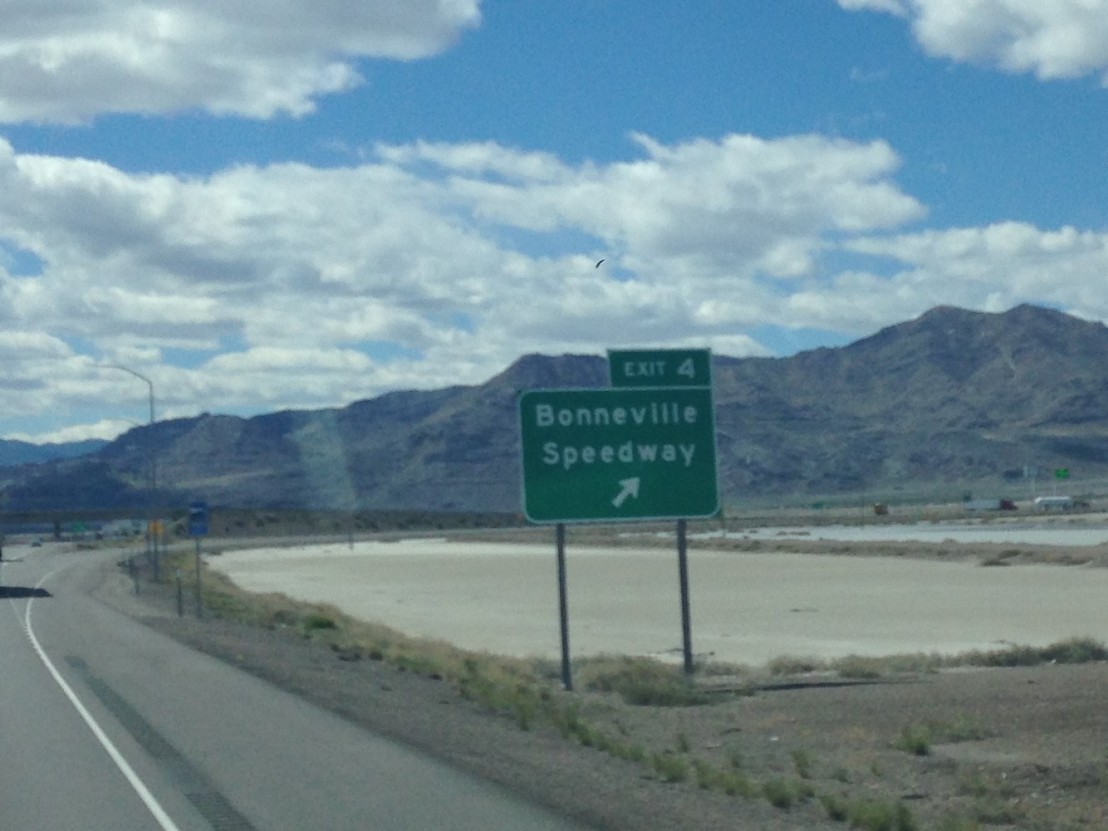 The term “salt flats” brings to mind the place where World Land Speed Records fall.  This is a good example of how I am “seeing America” on the Walkabout.  I see the Exit Ramps to all the Great Sights. 😉

Perhaps, tomorrow, I will see the Exit Ramp to the Golden Gate Bridge.

One thought on “A Lot was Going on in Kansas”