2:  a place or state of temporary suffering or misery

They allegedly “sold” my truck – again.  That brings me once more to this vestibule of Hell where sins are punished.  I have learned the hard way that spending much time here is hazardous to my mental and emotional condition.  There is only one cure for this malady…ROAD TRIP!

I made another mass transit excursion today on the Dallas Area Rapid Transit (DART) System.  There is a bus stop just outside the gate and a number to call for the next arrival time (text 31313 to 41411).  As I have learned, every journey does require a destination.  After a short search, I decided the Dallas/Fort Worth Airport would fit the need.  I’ll finish that story later.

Accumulation of this load took an entire day.  The first shipper was about three hours away when I started.  The next was about 80 miles from there.  Then another 150 miles to the third.  There were some delays at each and the last one ate the end of the 14 hour day.  An overnight was spent in the local parking where three Port-a-Cans (one was padlocked) were the total of the “facilities”.  Start time was early in the morning, setting up a well-timed trip.  The stop for the day was in Kingman, Arizona, for a total of 548 miles.  Since most of that was in the 55 mph (for big trucks only) California, it was a good day.  Those drivers permitted to go 70 don’t like my obstructive slowness.  But Hey, I didn’t vote for this silliness, so don’t honk at me!

From Kingman, it was an agreeable journey of 644 miles (a new personal record) in states with reasonable speed limits.  While I could have squeezed in a few more miles, there was no real reason to do so, since now the dreaded Eight Day Limit left me with less than seven hours for the next day.

The port of opportunity was a Flying J truck stop in Tucumcari, New Mexico.  I worry about the accumulated effects of sitting behind the wheel for long periods.  Seven and a half hours without stopping is not unusual.  Climbing down out of the truck after that, I look (and hurt) like a pitiful, arthritic old man – and I may well be one, by now. 😉  So, I have endeavored to make more mileage by foot to strengthen the ambulation system.

As we have discussed before, a destination is required to justify and define a journey of any sort.  That being said, the journey itself is still the most important and significant aspect of life – my life, anyway.  While there is another truck stop across the road, something more “secular” and distant is to be desired.  Finding nothing of interest around me on Interstate 40,  an  iMaps search finds an edge of Tucumcari nearby, along the legendary Route 66.  Knowing this two-miles-and-a-bit walk will require a respite somewhere near the middle, I wisely select a place called Wailes Park as the destination.  I don’t know much about it, but surely a park must have at least one bench, no?

Bill’s Auto Shop is typical of the “picturesque decay” that dominates this area.  There are spme establisments on Route 66 proper that have either morphed into other retail roles or harked back to “the old days”.

Bill’s  shop apparently could not compete with both the both Route 66  to his North and the new Interstate to his South.  He might have better profited by a new business model, since trucks rumbled up and down this road during the entire stroll to Tucumcari and back.  There were numerous motorcycles in evidence, both here and on Route 66 proper.  All of them seemed to be full dress Harley Hogs ridden by grey-haired old men.  Maybe Bill could have opened a biker bar.

There is a Historic Motel in town, named for the Route.  You know it is historic because it says so right there on the sign.  It has fared far better than Bill’s and can be considered a “Nostalgic Landmark”

The floor-to-ceiling glass windows, alternating with bright primary color panels was typical of 1960’s “modern” architecture.  My elementary school has the same sort of theme split horizontally.  The airplane carcass is there to catch your eye from the road – and it works.

I found the park and made use of its benches, exactly as planned.

The Youth Conservation Corps was around in the seventies when I was a teenager.  It was modeled on the Depression Era Civilian Conservation Corps – a Public Works Project to make honest work for the massive number of unemployed men who would otherwise be idle.  This is apparently a lost concept today, when idleness is subsidized and therefore encouraged.

The YCC kept the young’uns busy in the Summer with just such projects as renovating public parks like this one.  I applied once to the YCC in Texas.  On the application they asked about hobbies and I had listed motorcycling.  My Explorer Scout Post Advisor, who had also worked as a counselor for the YCC let me in on why I was rejected.  Apparently, the director of that chapter of the YCC trashed any application that mentioned motorcycles.  I got a job as a “helper” with an industrial construction firm that summer where I learned welding and fitting.  That eventually became my trade that earned me enough to get through College, so it worked out for the best.

Just in case you didn’t know where you are, these “brands” appear along the sidewalk. 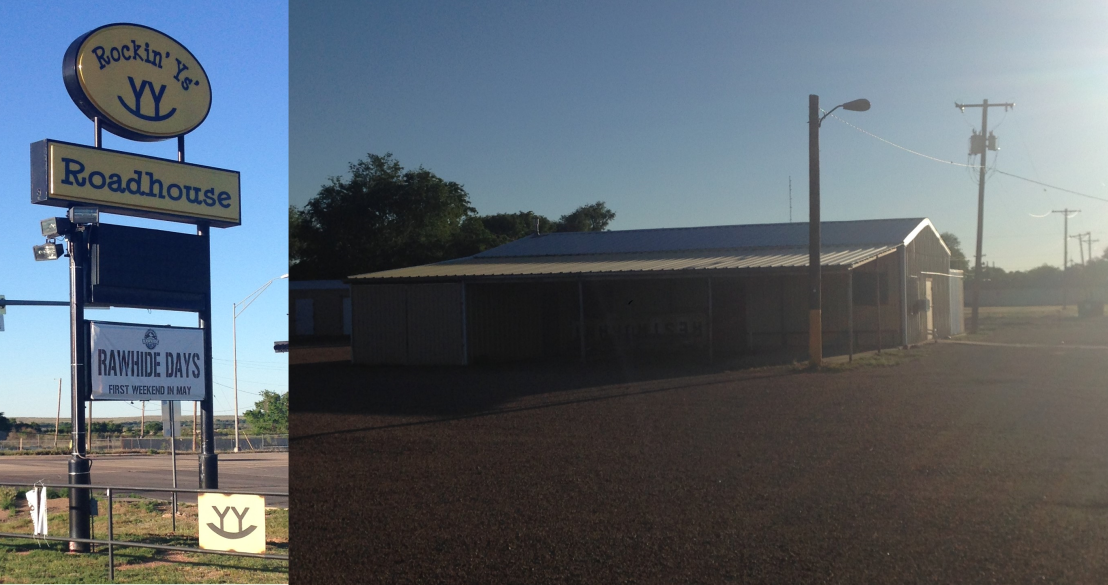 A local dancehall (I’m guessing).  The venue doesn’t really live up to the sign.

There were three of these, each distinctly different, except for the tires.  I reckon they are aimed at some unlimited class truck racing where wheel size (and little else) is strictly specified.

Back to the Interstate.  I missed all this prominent Geology until the return hike.

Leaving Tucumcari, the route was due East across the Texas border.  My fuel stops are chosen for me and the exit, outside Amarillo was closed for construction.  I had to make a return on the Westbound access road.  Leaving the truck stop the entrance back to I40 was likewise closed, so forcing the traffic onto the Eastbound feeder, which passes a weird Texas Landmark.  I have viewed this from the highway several times, but the closure of the on ramp had made it glaringly convenient to stop this time for a closer look.

There it is in the distance.

It is called the Cadillac Ranch (not to be confused with the restaurant in Denver).  An art group called Ant Farm sought out an eccentric rich Texan named Stanley Marsh 3 (who apparently had an aversion to Roman numerals) to sponsor the project.  Marsh was already known for prankish (but artful) stunts in the Amarillo area. 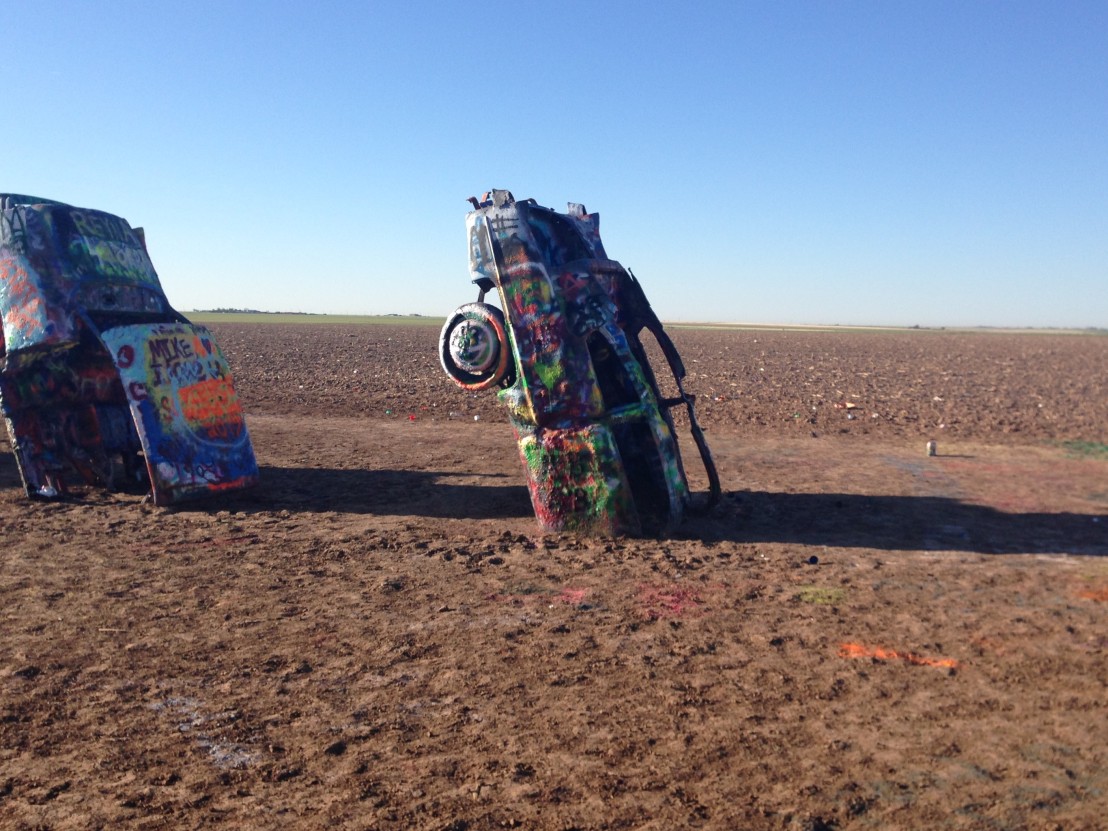 A Russian decorated this one.

I am conditioned by three semesters of college Russian classes to recognize the Cyrillic alphabet.  It was 40 years ago, however and I can only barely recognize the word in red as something like “bulochki”.

The alert reader might remember when Hillary Clinton gave a Russian diplomat a plastic “reset” button.  Here is a picture:

Without stopping to comment on the lameness of such a stunt, I remember that the Russian took one look at it and said, “You have the wrong word.”  It turns out that the button is labeled “overload”.  Now, you may think this is not especially important.  You’d be wrong.

Here is the interesting part:

I noticed this immediately because of my long-ago acquaintance with Russian.  The “wrong word” is also spelled in the wrong alphabet.  This “PEREGRUZKA” marking is what is called a transliteration.  It is a Russian word spelled with Latin letters (the same ones we use to spell English).  Transliteration is used in teaching the Russian language to people who use the Latin alphabet for their own language.

The true spelling of the word looks like this:   “ПЕРЕГРУЗКА “.  That is spelled in the Cyrillic alphabet which every beginning Russian student is doomed to learn.  My keyboard does not type Cyrillic and I could look up the keyboard number codes and generate these letters one at a time – OR – I could type the English word “overload” into an online translator and cut and paste the results.  I did the latter.

On the other hand, the Russian diplomat can recognize his own language in a foreign alphabet – so well that he knows they picked the wrong word.

I guess we know who is going to come out ahead in these negotiations, don’t we?

But, what Secretary of State was ever fluent in Russian?

That would be Condolezza Rice.

However, Madam Secretary Rice would never stoop to such a silly stunt. 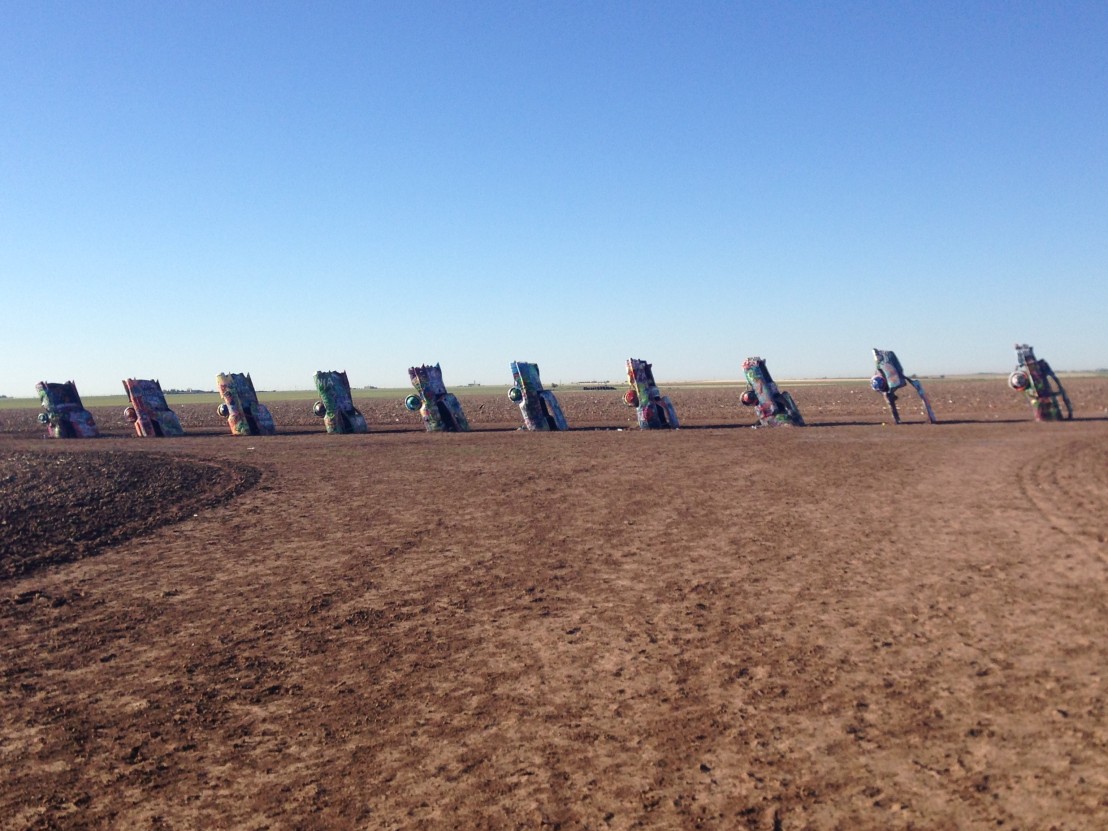 The cars were “planted” in their production paint and accumulated the graffiti over the years.  Such is the competition in spray paint that the bare ground around the cars is also adorned.  A local motel chain sponsored a renovation to restore them to “factory colors”.  That lasted less than 24 hours and even the sign prohibiting graffiti was “tagged”. 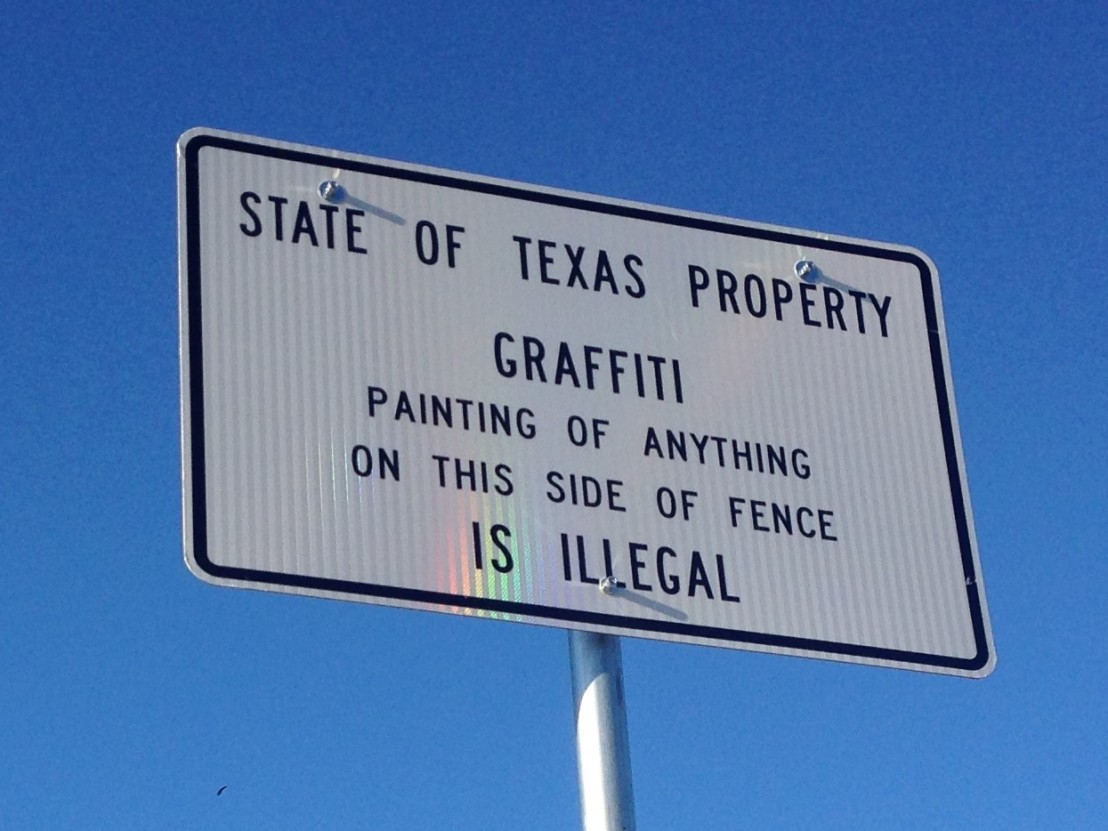 The “Ranch” was actually moved here in 1997 and is on State property.  Here is a stern warning about the limits of graffiti.  The sign is about 15 feet high and you know why! 😉 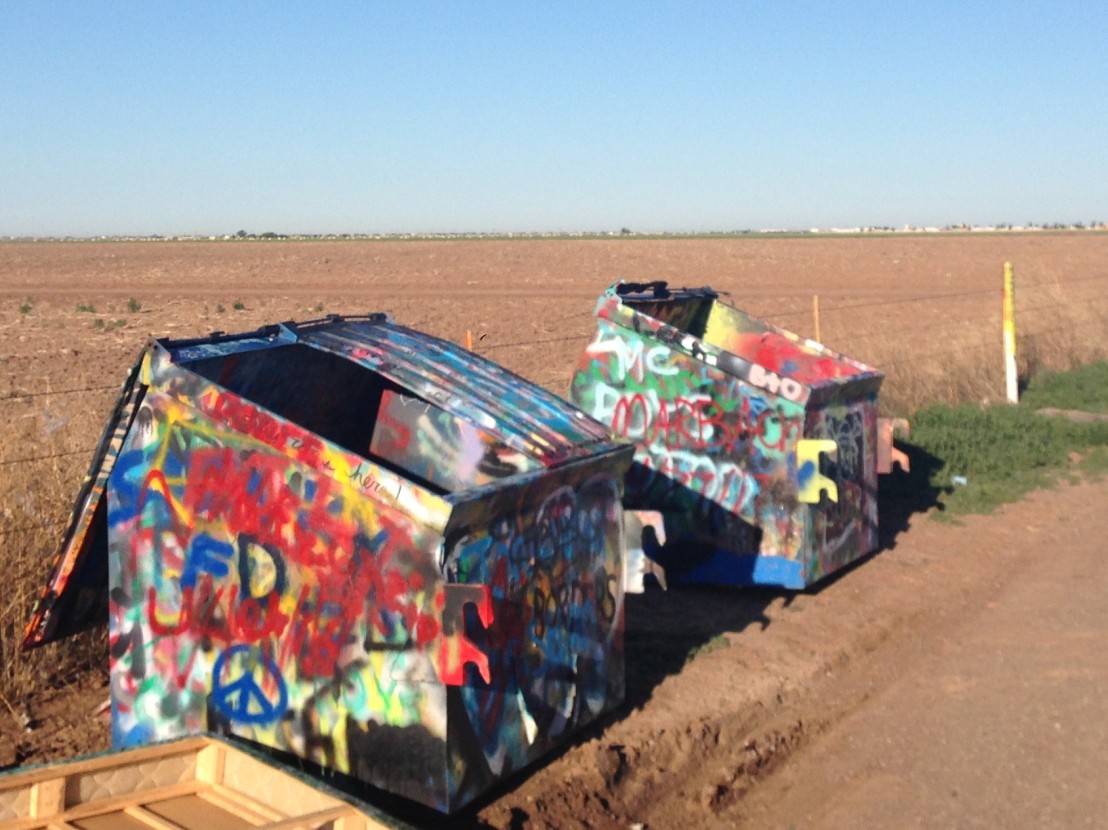 And here, on “this side of the fence” is the indication of how seriously the State Law is observed.  Putting the dumpsters 15 feet high is probably impractical.

I regret that my camera went all out-of-focus and most of the closest pictures are not worth posting.  The camera mysteriously recovered on its own after that.

3 thoughts on “Route 66 and the Cadillac Ranch”