This new phase of the Walkabout is as yet unnamed and undefined.

Your Captain has turned off the “No Thinking” sign and we will be traveling at an altitude of up to 8000 feet at a speed of 65 miles per hour.  What lies ahead is unknown.  Welcome aboard.

Today find us in North Sioux City, South Dakota.  If that sounds familiar you are thinking of Sioux City Iowa, which is only a few miles away.  Not far from there is South  Sioux City, Nebraska, where the new ship awaits.

The second day of orientation and training is about to start.  Despite my earlier expectations, the new truck is blue and will be hauling refrigerated trailers, much as before.  Less than two weeks ago, my family came to Purgatory (not the ski resort) as I evacuated from the Kenworth – not 12946, but her erstwhile twin sister ship 13048.

While I have much to criticize about “The Company”  (the ones with the black trucks), They did train me to drive these behemoths.  I can’t find much fault with that accomplishment and I truly did find the experience rewarding and challenging.  But more mundane considerations dictate that I need to move on to something more profitable.

Not to be too blunt about it, but, “Man does not live by adventure alone”.  The prospects for earning sufficient living at The Company depends upon accepting a partnership arrangement where I would assume a large portion of the Risk.  They insisted that this was a reasonable path to “success”.  I remain unconvinced. And, so I bid adieu to Purgatory.

It was my intention to take up with “bulk operations” (tankers) carrying hazardous material.  The trucks are orange.  This was not actually a preferred change, but promised to be at least more rewarding financially.  It did not work out and I’ll be still driving refrigerated goods around.  But now it’s in blue trucks and it pays better – almost as much as I could expect from “Bulk”.

The Orange Operation requires me to lose some facial hair.  There is emergency equipment that needs a good seal on the face to exclude poisonous gas.  The style of beard I keep is called a “Van Dyke”.   For a while, I was reluctant to use this term, which has certain connotations.  Upon reflection, however, I realized that the latter term refers to a manly individual who appreciates women.  So…no complaints.

In any case, while the moustache could remain, the chin hair was doomed.  I was hoping for a “Clark Gable” look or possibly a “David Niven-ish” one   The actual result was much more “Joseph Stalinesque”.

I had been convinced by the First Mate to trim my face like this before and the result was two traumatized offspring who wondered who I was and what I had done with their somewhat better-looking father.  When I saw a picture of myself in that condition, I had immediately grown it back then,  This latest facial hair amputation had the advantage of being done on the face of a person who had lost nearly  a quarter of his body mass.

However, the same individual had also accumulated another decade of age.  The results were still not an improvement and now that the Orange Operation is not an option, I hasten to grow back the previous situation.  That effort is inhibited by the unfortunate fact that my beard is mostly gray in that region of face.  Just now I look like it has been snowing on my chin.  A rather dirty snow, at that. There are also what look like gaps in the upper part of “Stalin’s Broom”  which are actually creeping grey hair.  I will persist nonetheless and an equalizing “trim” is not far away..

I am writing because I cannot sleep.  The fact that it is 4 in the afternoon and warm in the bunk (despite what I thought was a  functioning APU) has lots to do with thae.  Night driving will be a bit more frequent now, but I have hope that I will adapt.     Some views of the Missouri River were quite inspiring this morning.  No photos available.

The first load was delivered on time and the drive was actually rather pleasant.  There was an extensive detour in St. Louis that had me on surface streets in the area around the stadium. The :turnaround” is impressive, as I had a new load scheduled before the first was dropped.  I hope to establish a reputation for being the guy who will take most any assignment – a situation I find challenging.  Some of my fellow “orienteers” were reluctant to take loads to some parts of the country.  While I find some places annoying, they are a great source of writing material.  Most likely because of the incredible situations that seem to crop up so often.

The “Blue Company” has some areas where they have no freight.  California, Arizona, Nevada, New York and New England for examples.  However, one of our speakers mentioned the idea of a bonus for New York City. They may be looking at prospects there.  He came closer to reasonable than the fellows at Purgatory, at least.  NYC requires some additional rewards, to say the least.

I am working on new ideas for photographs that might be impressive – more on that later.

The start of the trip was not promising.  A lot has changed.  The truck is a Freightliner, not a Kenworth.  Note below the sporty chrome mirrors and smooth blue color. 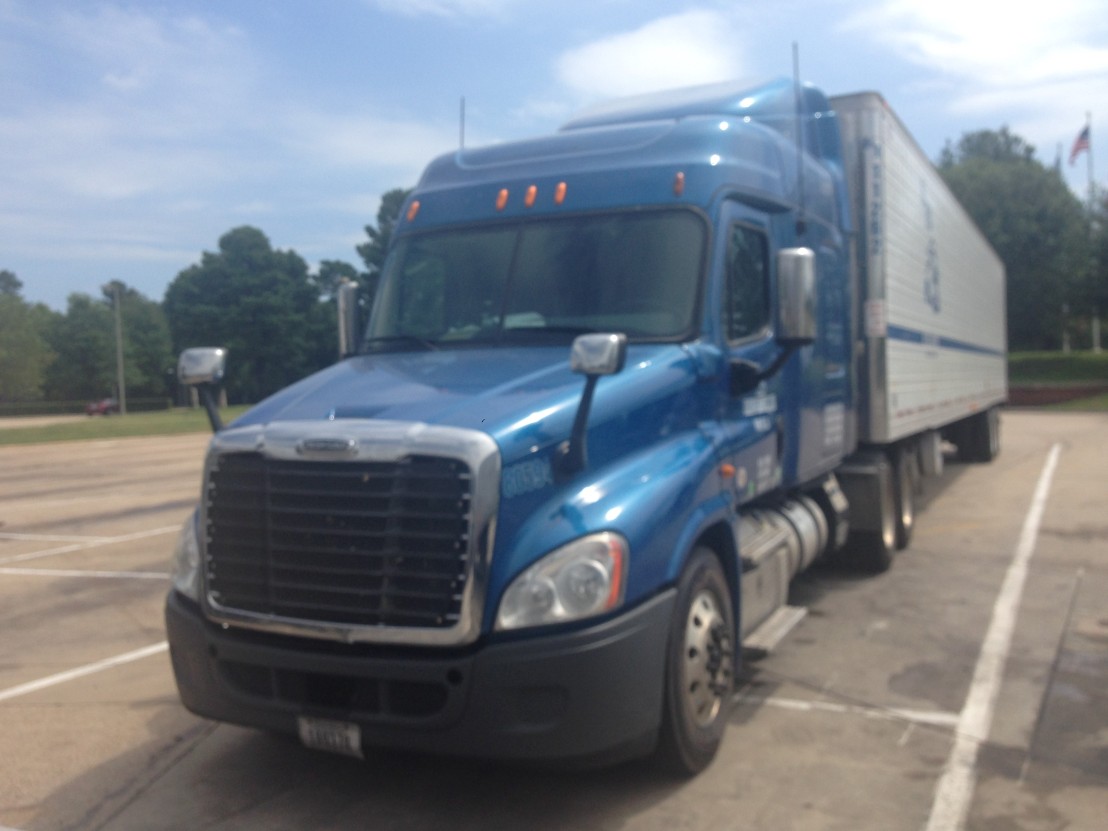 The New Truck has well over a half million miles and is the oldest I have driven.  But it seems to be in better shape than either of the Kenworths or the Peterbilt from last year.  The clutch and the shifting are both as smooth as silk.  Visibility is great and it is shorter, handles better and is more maneuverable in yards.

The trailer is different, in several troublesome ways. Procedures and expectation are not as before.

It was a nice drive and I had the intention to drive through St. Louis, but traffic began to gather at 400.  I almost gave up at a nice truck stop thinking this was rush hour building,  but decided to press on when I realized it was Sunday.  Traffic again.  Guacamole, this is Sunday afternoon when everybody comes home from the weekend in the country.  I stopped in a Rest Area which turned out to have the narrowest parking I’ve yet seen.

Time to hit the sack and get up at 0200 to drive the deserted streets.

Somewhere in the Sleeper Berth yesterday I caught a cold.  The parking here is the most akward I have seen, with forward and rear parallel spaces where there should be diagonals.  I picked an old bus to park behind because I figured they would be leaving soon.  Then a flatbed showed up when its neighbor left and parked next to it..  Now they are working on the vehicles they carry and I haven’t been able to figure out what their goal is.  By the way, there were at least six dogs in that bus.  Five were short-haired Labrador-looking, but white in color.  The Sixth was a Husky. 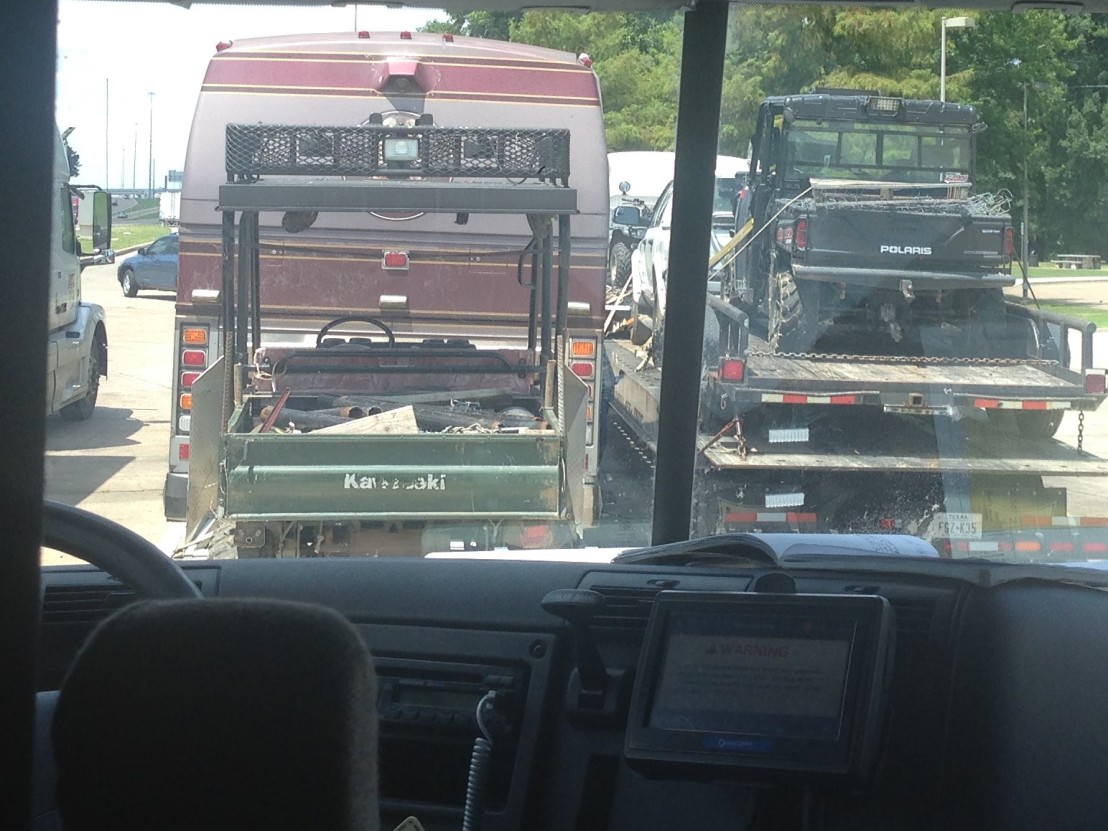 The Bus and the Flatbed.

Update – the bus moved and I am first in line.  I will put my cold to bed now.