I was just “checking the tires” and I noticed a few drops of rain.  I am hoping that a good soaking would come from the ominous flashing in the Northern sky, since the ship has accumulated some road dust.  So far, the rain has picked up a bit, but the deluge is not yet arrived.  A log entry is nevertheless appropriate, even if just to address it with the place name of “Peculiar” where “The ‘odds’ are with you”.

“A community that is peculiar in name only. A name which has overshadowed our rich history. Yet, this peculiar name has somehow set apart persons associated with it, creating a chemistry, within them, which makes them very important to each other. July 29, 1868, Robert Cass County surveyor, surveyed the town of Peculiar into lots, blocks and streets. This certified plat was filed as ‘The Town Of Peculiar’. Early settlers came to western Missouri by riverboat, rail and overland. Many were migrating for the second and third time from communities in Illinois, Iowa, Michigan, Ohio and Pennsylvania. The ‘Town Of Peculiar’ also received families from Virginia, Kentucky and Tennessee.”

There is a peculiar thing about this name which is reflected in the dual aspects of the word itself.  You see, “peculiar” is its own antonym in that it means both “strange or odd” as well as something like “typical of” or “belonging to”.   Perhaps “unique” would be the most appropriate synonym.

“his accent was a peculiar mixture of Cockney and Irish”

“the air hung with an antiseptic aroma peculiar to hospitals”

synonyms: characteristic of · typical of · representative of · indicative of ·

I looked up the National Radar image for the area and added a little black cross at a position approximating Peculiar.  It appears that, no matter which way the weather moves, more rain is in the near future. 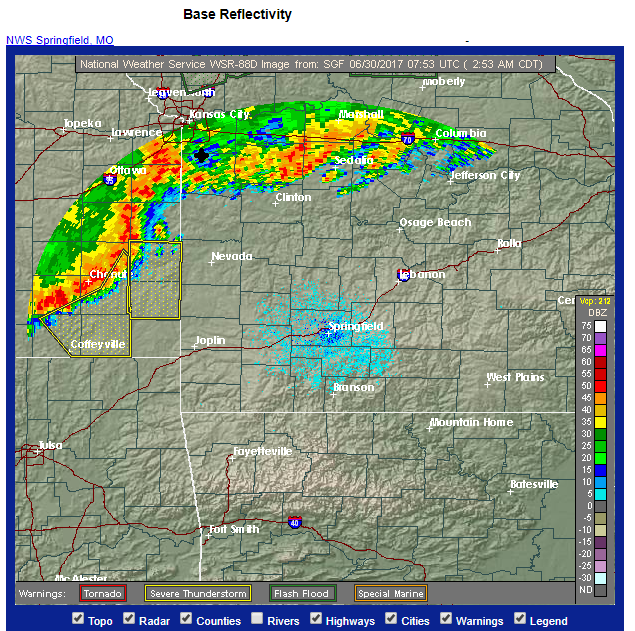 It is also “peculiar” to think that I did all this research and composition at Three AM, from the sleeper cab of  a truck parked on the outskirts of a small town in Missouri.   My more “mature” readers will join me in the awe of modern technology.  Any young ones will ask themselves, “What’s the old man mumbling about now?”  😉

In a few hours I will fuel the truck and start off for nearby Kansas to pick up a load bound for Texas.  The rain is starting in earnest now and should provide a sleep-inducing background for a brief sleep.

I  was just here, a few days ago.  The road has brought me back where I sought only fuel, but found a prime parking spot –  with a quarter-mile of run-out in front of it – at ten o’clock at night in a truck stop across the highway from a Walmart.  Such a bounty is not lightly passed by and I did not.  A target of opportunity, it had been.

It was that day that I had encountered another bleak and ominous tableau what grim fate lies in wait for careless driver.

So severe is the damage that I cannot confidently recognize even the make of the vehicle.  It may be a Volvo.  More to the point – I don’t see how the driver might have survived.

That particular stretch of highway is relatively benign.  But, where I wandered (literally – I took a few wrong turns) today was more typical of Oklahoma highways.   To provide an example:

A turn was indicated by the as-yet nameless Navigation personality – from a narrow section of US highway to a narrower section of state road. A shear drop into a ditch loomed in my rearview, those 70 feet away.  My approach had to be one where I  crossed into the opposing lane completely – even taking up that lack-of-a-shoulder, as well  This is accomplished by making as much of that theoretical turn as possible and stopping just short of crushing the two cars waiting at the stop sign.  The hope is that they will look around, assess the situation and decide to turn right in front of me as I sit waiting.  Furthermore, we rely on the drivers of the vehicles behind those to have the common sense to yield their half of the road until the Beached Whale passes through he ill-advised turn like the proverbial camel through the eye of the needle.  It did work, but it could easily have turned very ugly.  I have decided never to leave the scant comfort of a US  highway again – in Oklahoma

I don’t mean to say that Oklahoma has an excess of bad roads, you understand…

Well…Yes, I do mean to say that.  Exactly that, in fact.

The days of poverty at “The Company” are hopefully well behind me.  I harbor no ill-will for the Purgatory-based Black Truck outfit.  They trained me and have met their promises, generally speaking.  They did not however, promise much.

The photo below is from my previous visit here.  Chance put an Orange Company truck next to my Sioux City Blue.

That which was set out to be accomplished (right) meets the way reality shaped itself despite the “best laid plans” (left).

I have a collection of ancient devices called Compact Discs for the majority of my “eclectic” assembly of music. The device that maintains what little music I have stored as digital files is attached to the truck’s radio with a USB cable.  Those selections are still set to play in alphabetical order and the first in line when the truck starts in the morning is “All Systems Go” from the Soundtrack of the movie Apollo 13.  It is a stirring orchestral piece by the late composer James Horner, whose work you know from a dozen movie scores.  To mention a few…Titanic, The Wrath of Khan, A Beautiful Mind.

I have not altered the sequence of the music list, since it is appropriately inspirational for the beginning of a journey – including as it does a movement that accompanies the scene of the launching of the great Saturn V rocket.   As if the launching of a lunar rocket was not sufficiently impressive, Apollo XIII’s start includes the failure of one of the five engines that propelled the second stage (the “Glitch”)  If you listen to the score you can hear the movements pertaining to the launch, the Glitch and the sudden weightlessness when the rockets shut down – all without any reference to the movie. The redundant design of the system allowed the other engines to make up the difference in velocity and saved the mission – at least until its later problems.

However, the true and dramatic lesson of an Apollo launch is to be found in the launch of Apollo Twelve.  That launch took place in a thunderstorm and the huge trail of rocket exhaust (as it turns out) created a perfect channel for a lightning bolt that struck the vehicle.  I remember an interview in which the late Commander Charles “Pete” Conrad described the situation something like this:

“There I was in a Billion-Dollar*-Going-to-the-Moon Rocket with the “Abort Handle” in my hand when lightning struck the vehicle and the power went out.”

The “abort handle” was the switch that would ignite a set of solid rockets that would yank the command module (with the three astronauts) away from the potential bomb that the Saturn V could turn into and then it would drop on parachutes into the Atlantic Ocean from whence it would hopefully be recovered.

Anyway, when I think of Conrad’s predicament (and HUGE responsibility) in those moments…all of my own problems shrink to insignificance by comparison.

*A Billion Dollars was a lot of money back in 1969

There is a book about Pete Conrad called “Rocket Man”.  I need to find that in my stocking around the end of December.  Pete was known for his shear determination and innovative ambition for spaceflight.  For him to stand out in that respect when compared to other Astronauts was great praise, indeed.

He advocated for his final Gemini mission to be turned into a trans-lunar flight that would have been sent looping around the moon. That could easily have been done with the booster rendezvous vehicles called Agena rockets that were in use at the time.  As it was, Gemini XII set the altitude record in Space until Apollo VIII – the first Lunar experience of Jim Lovell, who would later command Apollo XIII.

2 thoughts on “From Peculiar to Apollo XII”