I passed this rest area just before the exit to my assigned fuel stop.  When I got to the truck Stop, there was a line of trucks backed up on the ramp up to the fuel islands,  The road was gravel with frozen slush and trucks were slipping around like so many novice ice skaters.  A rig coming out stopped and the driver put down his window, as I did in response.  He tells me to avoid the place unless I need fuel.  I did need fuel of course.  I am instructed to buy fuel here and there is no escape, but I thanked him for trying.  To say this did not bode well is to belabor the obvious.  Why did he stop to speak to me specifically, ignoring the others in line?  I can only guess that he was once a driver for The Company, like myself.

When the column of trucks moved forward, my wheels slipped.  I had locked the differential and so had all eight drive wheels spinning.  Fortunately, no one was yet behind me.  I let the whole rig slide back a bit and then steered off the  frozen slush ruts to newer snow, a trick I had just recently learned while walking to rest area bathrooms.  That made some forward progress possible.

Most of my readers are unfamiliar with icy sidewalks, so while I am on the subject of walking on ice, it also pays to take small steps, keep your hands free to wave around for balance and don’t let anyone rush you.  I was exiting the commuter train station in Oslo, Norway once  (I worked for a Norwegian company, then). All the locals were in a hurry to get somewhere and I was swept up in the crowd.  I made a faux pas (French for “stupid mistake” – I never learned Norwegian) and I slipped on that invisible trap they call black ice.  I landed on the back of my head.  Lucky it wasn’t some important part.  It must have looked bad because a woman screamed.  I told my coworkers about it and for the rest of the week, they watched me for demented behavior – more than usual, that is.

The fuel islands were chaos.  The truck ahead of me could not gain traction and he finally threw his tire chains under his wheels to make it to the pumps.  He wasn’t the first one to try that.  When I got to the pumps, I found some poor miscreant’s set of tire chains frozen in the ice.  I managed to fuel the tractor and pull up past the islands, to find what military men call a Charlie Foxtrot.  As I am sure I have mentioned before, this is a mnemonic phrase for an abbreviation of a “colorful” (obscene) expression for a massively confused and disorganized collection of human activity.  I did not take any pictures, because no one likes to be recorded in their misery and because I was busy struggling to get by, myself.

After fueling there was a bottleneck to exit where six lanes converge to one and trucks attempting to park are sliding around blocking the way.  Forty five minutes later, I was back on the entrance ramp, but exiting.  I wanted to warn the poor fool I saw entering, but I was in no mood to stop.  So, I just made the sigh of the cross at him (May God bless you, my son).  He was probably wondering what I was trying to tell him.  I am sure it occurred to him a bit later. 😉

There might have been a space I could have snagged by blocking the flow, but I wanted out of there.  Dante’s Inferno includes a section of Hell where sinners are imbedded in a frozen icy plane and this was beginning to resemble same.

I intentionally reversed my course (a trucker taboo) on the Interstate, found an overpass and returned to this rest area that I passed before.  There were two other trucks with three spaces between them.  I pulled into the center one.

Above:  The serenity of the Rest Area contrasts with the Dante’s Inferno of the Frozen Truck Stop

I promised Montana pictures and I have not forgotten.  Events accumulate quickly in this Walkabout and I struggle to keep up. Things worthy of notice happen while I am remembering events of days past. Hence, this method of the standard font when remembering and the italics to describe what is happening in the moment.  If it confuses you, imagine how I feel!  About half the time, I can’t say what State I am in (other than that State of Confusion).

The Moon over Montana, setting just before the sun rises behind me.

Arriving at those distant mountains seen before.  The sky brightens with the dawn

An outcropping of rock too steep for trees interrupts the forest.

A river crossing.  Please excuse the dirty windshield.  Some of the most impressive views are not available for photography since bridges and the winding mountain pass roads require two-handed attention.  This one was an “easy bridge”.  I remind the readers that the walls at the edges of bridges and scenic steep drop-offs are about three feet tall.  That would stop a passenger car from careening over the edge.  But, my Decaton cargo is stacked on a trailer floor that starts at about three feet above the ground and continues to a height approaching fourteen feet.  It would easily careen over the wall and into a river or over a thousand foot cliff.  The wall, in fact would only insure that the rig would tumble into the abyss, rather than merely plunge into same.  Therefore, I must admit that many of the most stunning vistas pass unphotographed while I strangle the steering wheel with both hands! 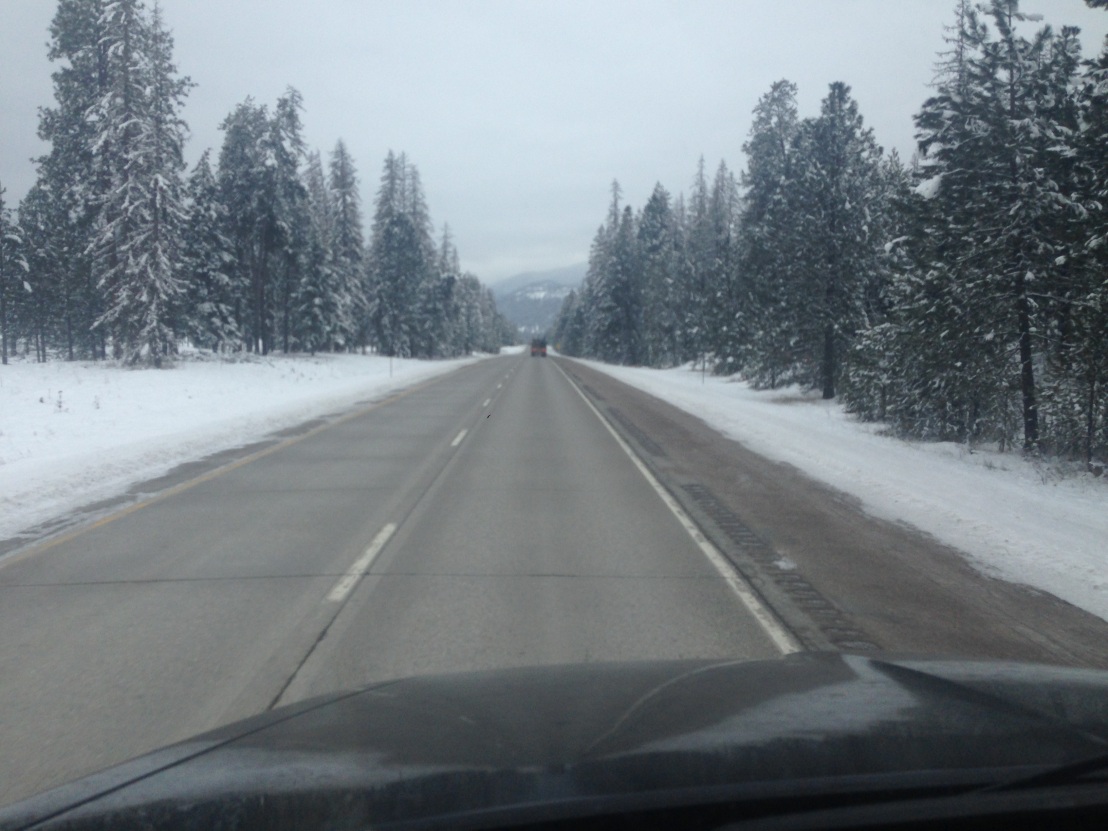 Through a National Forest. 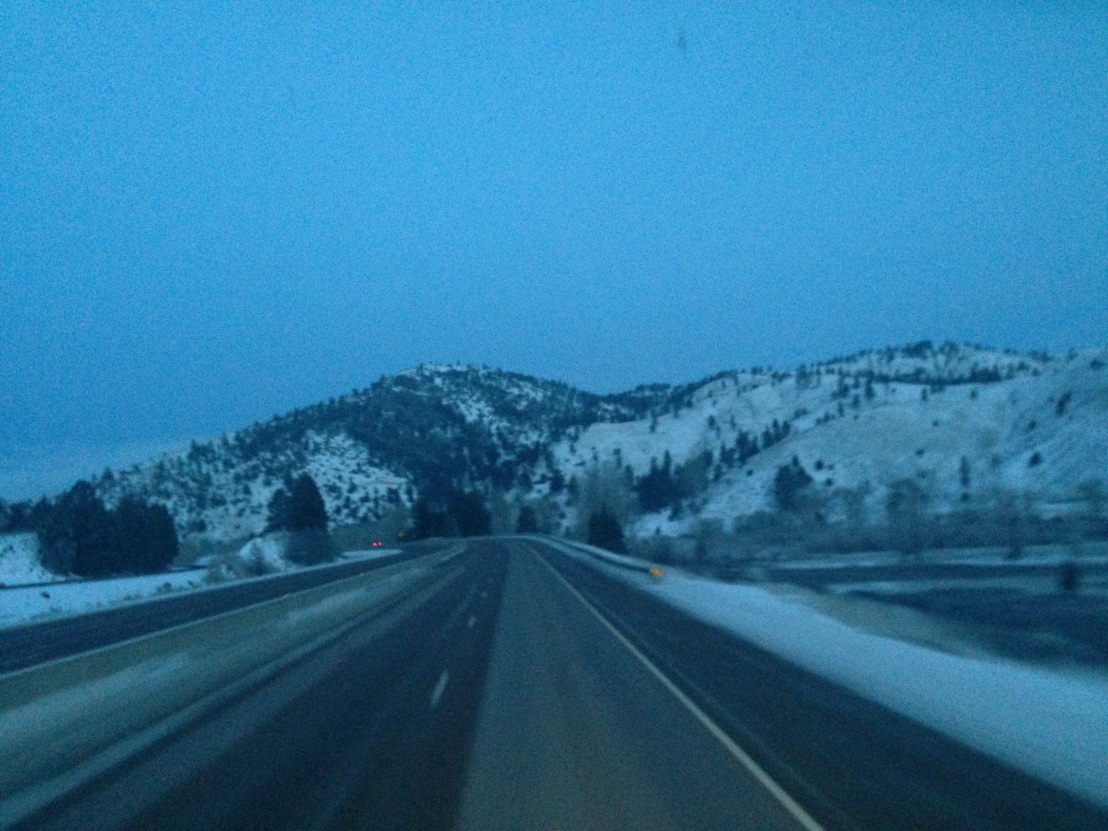 The river shares the valley with the highway. 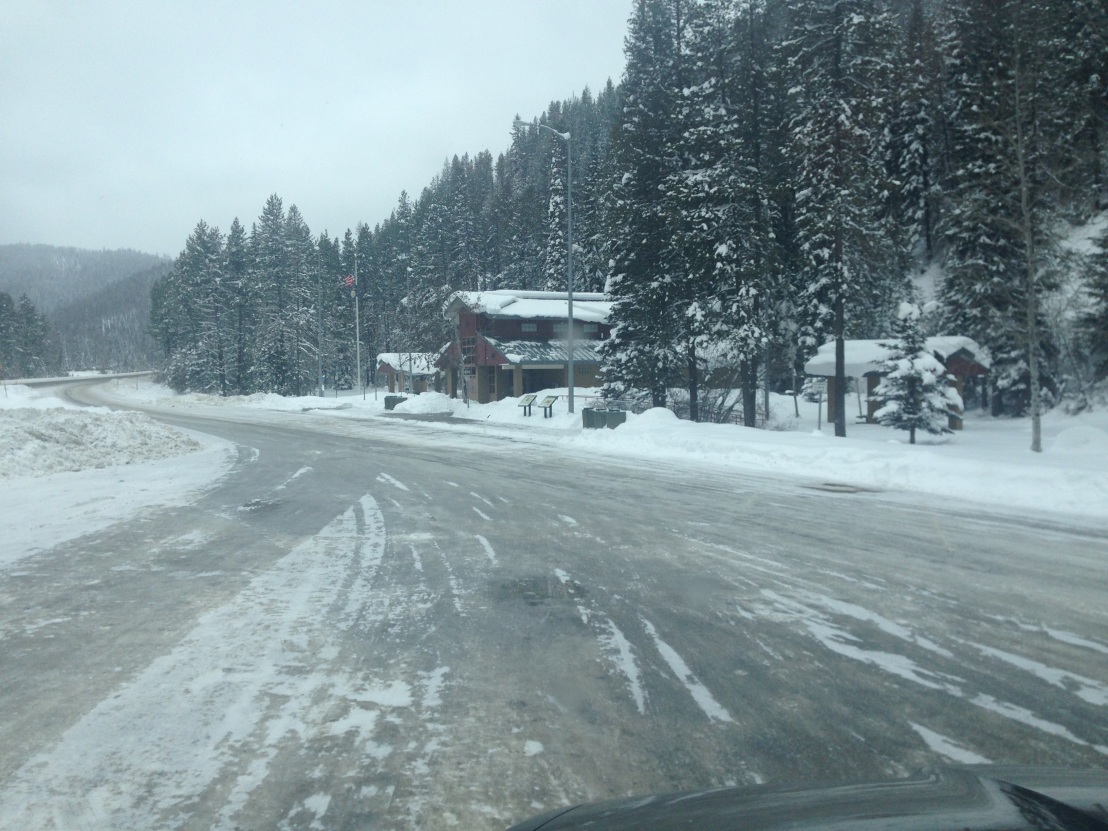 A snow covered rest area somewhere in the middle.  I should make notes of where these pictures are taken.   So quickly pass the miles and the vivid scenery that time and place are soon forgotten.

A Study in Contrast.  Very black cows on very white snow (this photo has run away – I will try to find it and force it back here – life is hard for photos;-)

Moonshine on the snow illuminates the landscape in a soft and eerie blue light.  I am not sure what caused that streak, just left of center.  I am sure it is not a comet, because I’ve seen a few.

Out of the mountain pass into a valley.  The photos just do not convey the majesty of the vista that reveals itself to me as I descend.  It was far more breathtaking than what you see here.  I guess you just have to be there in person to get the full impact.  You may begin to understand what drives me to travel.

The mountains loom over me as I glance (keeping eyes mostly on the road) up at them.  I am only half-joking when I say that I could have sold tickets for the trip I made across Big Sky Country.  The photos may hint at that awesome beauty, but far more vivid images remain only in my memory.  This is a sign for Exit Zero, at the Western end of Montana.

One thought on “Montana Again”