Ten years?  Balderdash – three centuries would not be enough!

The details of the term “Green New Deal” change every time the proponents of the GND are pinned down on the definition.

“It includes a 10-year commitment to convert “100 percent of the power demand in the United States” to “clean, renewable and zero-emission energy sources, to upgrade “all existing buildings” to meet energy efficiency requirements and to expand high-speed rail so broadly that most air travel would be rendered obsolete.”

The fact that anyone could list these three concepts as actual goals speaks volumes about how little is understood about energy use in the US.

Allow me to explain.

Please note that in the paragraphs to come, energy industries are referred to by capitalized names (Wind, Solar, Coal, etc).

Energy Consumption in the United States

Lawrence Livermore National Laboratories – among many other activities — does an energy audit of the United States every year.  In 2017 (the latest complete year available), the United States used 97.7 Quadrillion British Thermal Units – mercifully referred to simply as “Quads”.  Please see the 2017 flow chart below. 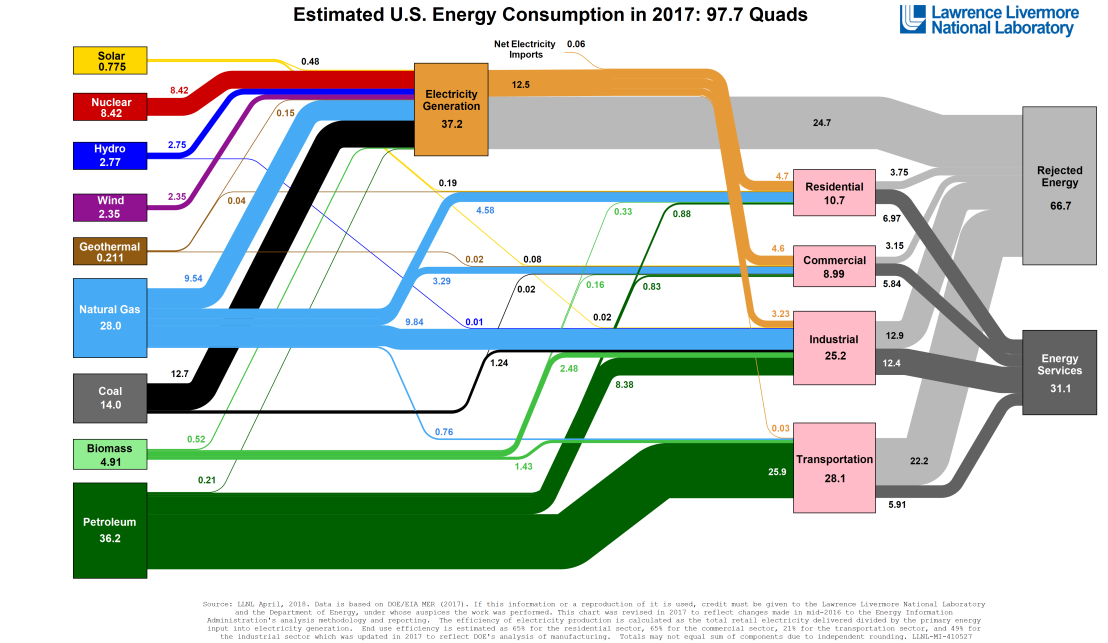 One Quad is equal to about 170 million barrels of oil.  But, do not be distracted by the units.  The important concept here is what sources provide what fractions of the total energy budget.  Luckily, the amount of energy in quads is almost the same number as the percentage.  That information has been collected by your humble narrator and is displayed as a table and pie chart, below.

Figure 2:  Comparison of energy sources by percentage.  Table and graph by author.

The earlier energy flow charts from LLNL show that “Renewable” sources in the mix have quickly increased by the equivalent of 48 million barrels of oil per year (0.285 Quads) in the last 5 years, thanks largely to generous subsidies, that caused Warren Buffet to observe that:  (Quoting “The True Cost of Wind Electricity”)

“….we get a tax credit if we build a lot of wind farms. That’s the only reason to build them. They don’t make sense without the tax credit. ”

This “Green New Deal” only needs multiply Renewable capacity by a factor of nine to replace Oil, Natural Gas, Coal  and Nuclear.  At the current — heavily subsidized — rate of increase, one might think that only 311 years (88.7 quads to be replaced, divided by 0.285 quads/year growth rate) would be required.

That simple-minded, optimistic estimate would be the case only if green power plants last forever – they don’t.  Wind and Solar plants are lucky to last 30 years.  Strike out that 311 years and change the date of completion to “never”.

Another problem is that Wind and Solar are intermittent and require 100% backup – by real energy like Natural Gas or Coal.  So, Wind and Solar won’t actually “replace” anything.  The dirty little secret is that they never have done so.

And as far as Biomass is concerned, it should be mentioned that right now the corn used to make ethanol (in the U.S. alone) could otherwise feed about One Billion People. Do we really want to multiply that number by nine as well?

Hydroelectric dams could actually contribute significant additional energy.  But those are no longer considered “Green” and Environmentalists are advocating for their removal. Hydro has decreased in the last 5 years.

Geothermal — with a great deal of expense — could realistically be increased by a factor of 9.  At that level, it would not even replace the disappearing Hydroelectric industry.

The idea of replacing airplanes with trains has good news and bad news.  The good news is that trains really are electrically driven.  The bad news is that their electricity comes from burning diesel fuel in locomotives or (only in big cities) from overhead powerlines, which also need a source of energy.  Stringing powerlines almost everywhere on the national railroad grid cannot be done in ten years, either.  Like-wise not appearing out of thin air is the enormous amount of additional electricity required to replace the diesel fuel.

The idea that this could be done in ten years is completely, utterly, stupidly absurd – to say nothing of the hideous expense.  Yet, people are actually supporting this idiocy with straight faces.

This whole “Green New Deal” relies on “Cartoon Physics”.  You know the drill — where Wylie Cayote saws off the tree branch, which stays in place (supporting the Roadrunner) as the tree trunk and Wylie drop away.   Or, he hangs in the air until he looks down to see that he has run off the cliff.  Then he survives the thousand-foot fall and returns to the cave to hatch a new plan.

Life is not a cartoon.  Three centuries of crippling expense, poverty-inducing regulations and forced re-industrialization would not be nearly enough to complete the “Green New Deal”.  Even if it were possible, it would have no effect on the alleged Climate Change, whatsoever.  Not least because no other nation on Earth would be so irresponsible to its own citizens as to join this complete idiocy.

The Green New Deal is simply a method to multiply taxes and introduce an all-powerful dictatorship of regulations that will make Nicolas Maduro look like a Libertarian.

6 thoughts on “Cartoon Physics Required for the Green New Deal”