This is yet another post that was languishing over at the WordPress site.

“Stay away from Dallas”.

This sage advice is from me to myself.  I am in Denton, Texas, “sitting in a door” awaiting the unloading of produce from California.  A “preplan” has just come across the satellite link that tells me my next load will be picking up at the Coca Cola Syrup Plant in Dallas.  The destination is Denver for 840 miles – a two day trip that will undoubtedly be stretched into four days, as we discussed in earlier Chapters.  But, I accept the load because I really have no choice.

Now for the Rest of the Story:  A note from someone named Billy  says I should bring my load to the Yard.  So, you see the lesson is clear:  Stay away from Dallas.

I called my Driver Manager to Confirm this – since I have no idea who “Billy” is – and, yes I have to make an appearance in Purgatory (not the ski resort (NTSR)).  One reason is a physical exam , after the third such in the last nine months.  I passed them all, by the way.  The first and third exams  had a one year renewal.  But, since my livelihood is apparently a low priority, I have to go in for a forth.  Today is Friday.  Since it its nearly 4 PM and the light is still red – meaning I cannot yet leave the door – there is no way I can get there during “office hours” – and I suspect the Doctors do not work on Weekends.  So, unless I miss my guess, this will be three or possibly four more days of  ungainful unemployment.

The unloaded message from Target has come.  The light is still red but when it changes I can go to Coca Cola and then to Purgatory (NTSR).  Meanwhile, my clock has run out completely and utterly.  The Coca Cola Plant policy is – as I many times said as a bartender – “You don’t have to go home, but you can’t stay here.”.  I had told the shipping clerk that if I could not be loaded in two hours, I would come back in the morning.  That particular clerk was not among the Polite and Helpful Shipping Personnel of whom I have written before. He ignored my advice completely.

While the clock was ticking down, – in anticipation of what finally did occur – I had called “Night Safety” and asked for advice.  Their sage counsel was basically this: “Call me when you actually fall off the cliff.”

One thing I have learned in this occupation (maybe I should start a list) is:  When you have an insoluble problem, ask the people in the plant because they have seen this a hundred times before,”  The first choice is the Yard Tractor Guy,  If he is unavailable (being very busy), ask the man who brings you your paperwork.  That helpful and cheerful individual clued me in to some big parking lots to be found about a half mile away.  I chose a Lowes lot, because, on the way in I had stopped there to confirm directions.  There was an old trailer parked there that I could hide behind to avoid any questions from the Local Constabulary.

I was officially “off duty” and I creeping the truck at 10 MPH – flashers going – I manage to stay that way to find the Lowes.  I also find another truck who has taken my hiding place behind the abandoned trailer.  One look by the loading docks finds tow-away warnings with certain words in bold font.  There was, however a string of about 10 conventional parking spots – off the side of the building, but in full view of the street.

Calling Night Safety is no longer useful since they may  well tell me to move.  And I have no confidence in their advice now anyway.  So, I mentally prepare my defense for the sin of parking.

The “Yard” is a singularly depressing place.  Every driver there is earning nothing. When I arrive, I am handed a list of tasks I must accomplish in order to escape Purgatory (NTSR).  I find that I will be here at least three days between safety lectures and the physical exam.  A few of the safety items are accomplished before the office staff goes home at noon, Saturday.  The remainder must wait until Monday.  With few exceptions, every driver here is trapped without transportation.  You don’t just drive these trucks when you think you want to go somewhere – you must be “dispatched” and you won’t be, until your list is complete and signed off.  There are two “loaner” cars for the untold hundreds of drivers.  The waiting list is three hours long and the car must be returned within one hour. The entirety of Saturday afternoon was consumed with one trip to Walmart.  This was urgent, since the truck’s food supply has dwindled to “Spam Rations”.

Sunday was shaping up to be especially dismal, having literally nothing to advance the cause of getting out of Purgatory (NTSR).  I thought of my son Benjamin now attending college classes about 50 miles from Purgatory.  I would like to visit him, but that would be a trip out of the one-hour-loaner-car range.  A taxi is financially counter-indicated in my current circumstances.  Fortunately, Dallas has an extensive mass-transit rail system that nobody seems to know about. I hatched a plot to make a Great Railway Journey to The University of Texas at Dallas (which is really in Richardson, Texas).  Some research came up with this route:

Take the 597 bus that stops right in front of Purgatory (NTSR).  That takes me to Lawn View train station.  From there I take the Green line downtown and transfer to the Red Line which takes me almost to Plano.  I get off at City Line/Bush station and take the 883 UTD shuttle.  About two hours and fifteen minutes each way.  Since the alternative was to cool my heals in Purgatory, I decided to make the journey.  The price was right, being a five-dollar day pass.  I noticed that it was good until Three AM the next day.  I am quite sure this is because bars close at Two. 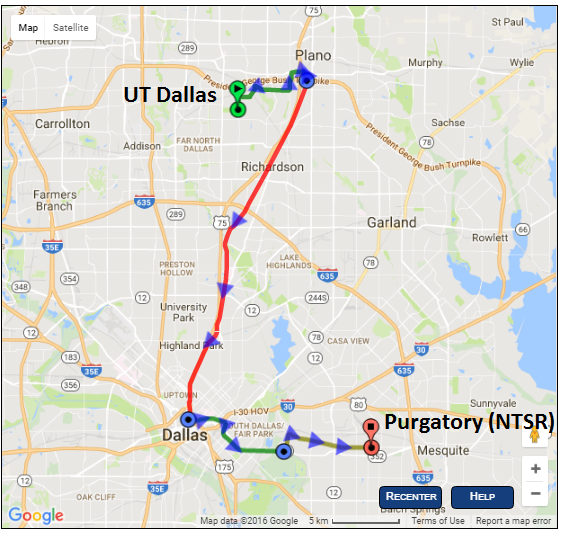 Above:  The trip plan to UT Dallas.  The Astute Reader will notice that this is actually a picture of the return route. 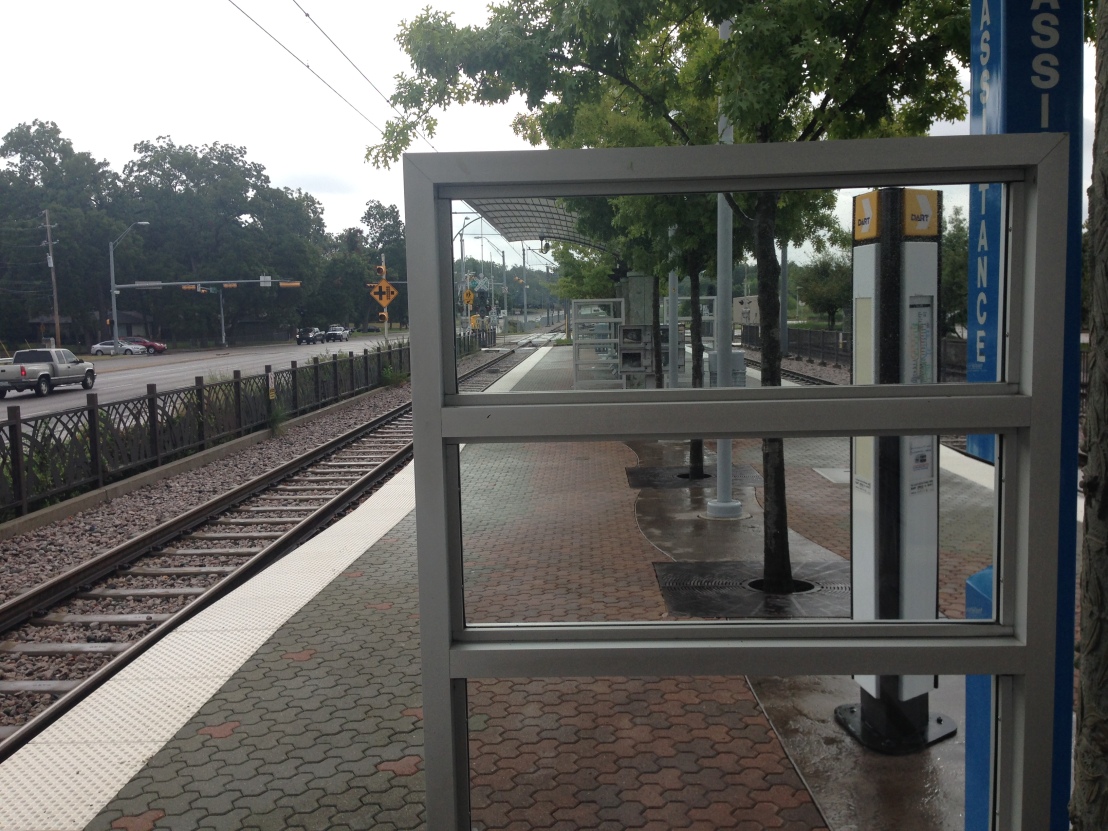 Above: The Green Line station at Lawn View 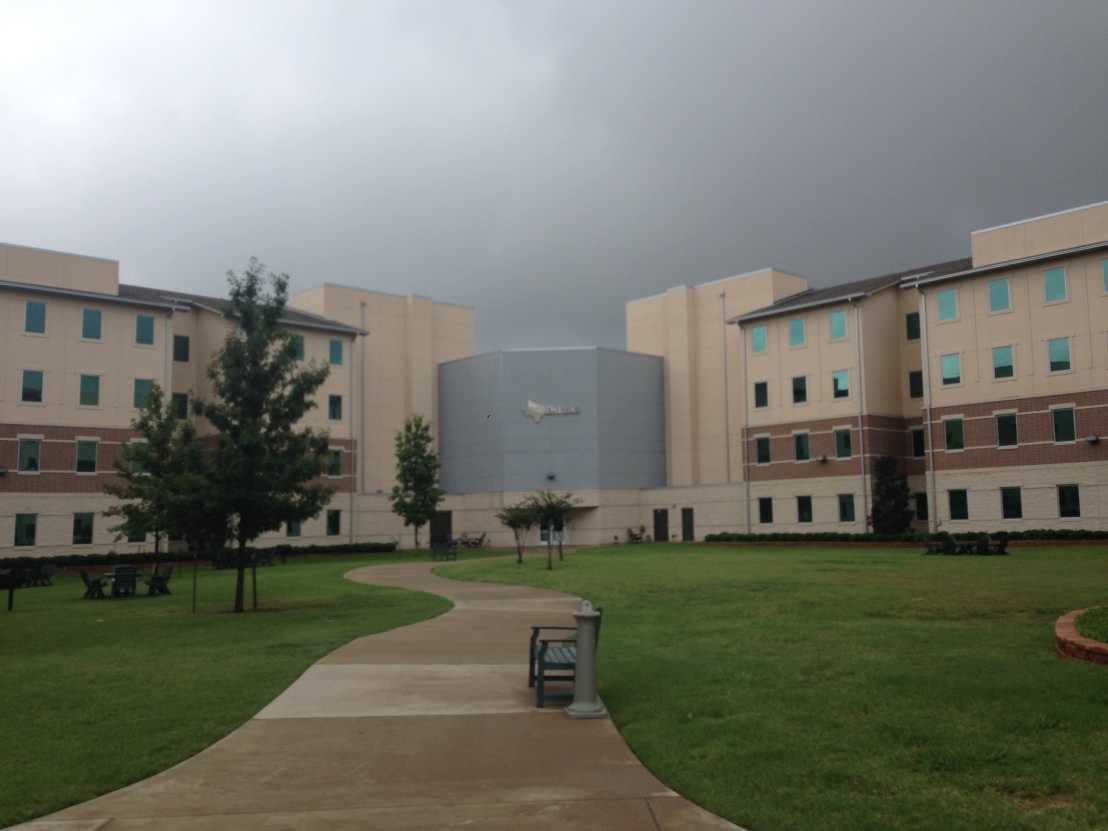 Above: Benjamin’s Dormitory Building.  His window is third from the left on the second floor. Like almost every building on Campus, it is very new. 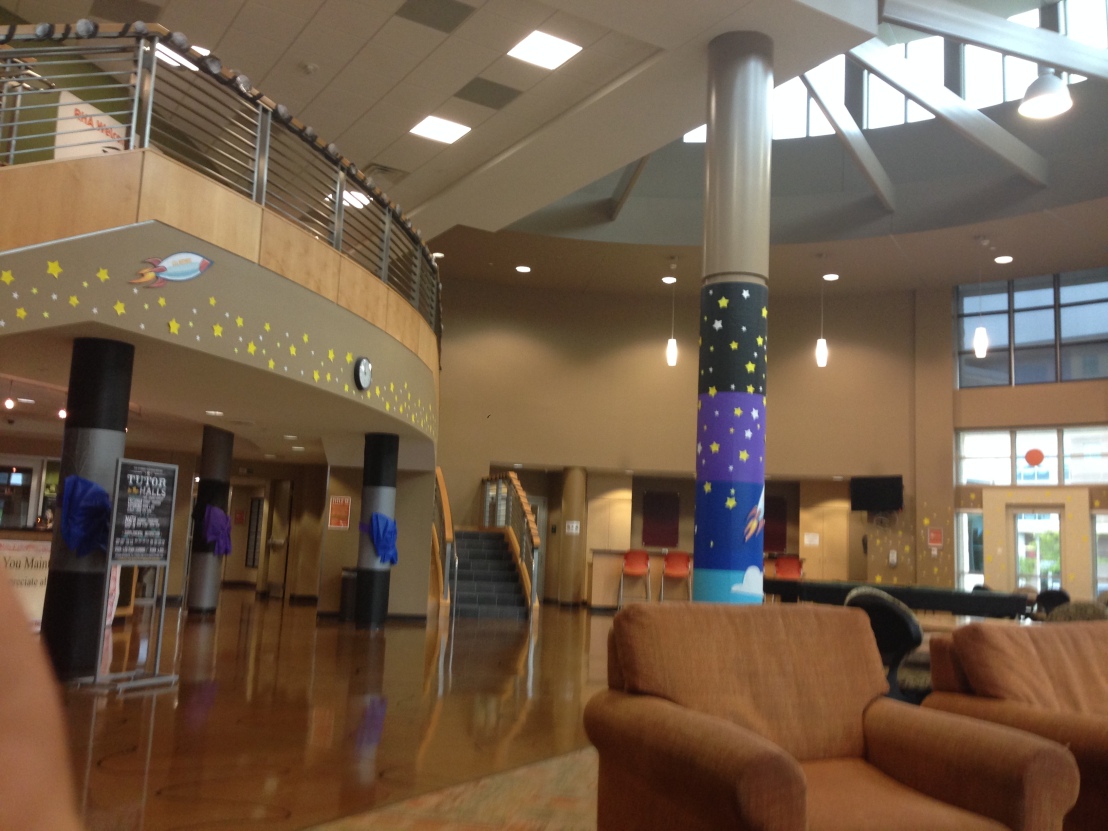 Above:  The lobby at Benjamins Dorm.

So, instead of a depressing and lonely vigil of hopelessness, Sunday had become an interesting trip to spend some time with my beloved son.  There is, after all a reason not to avoid Dallas.  For this much-needed relief I was truly thankful.

Benjamin took me to lunch and then we went shopping at Walmart.  That was yet another bus ride.  The stop outside Walmart was littered with abandoned shopping carts. I, your humble narrator, pointed out (ostensibly to Benjamin, but meant to be overheard by the mass of scholars there assembled) that the arriving student-shoppers could choose a cart from this stash and take it in with them.  I set them an example, but none of the “Future of America” saw fit to join me.  They did select carts at the door, however.  And no doubt they added to the collection at the bus stop on the way out. 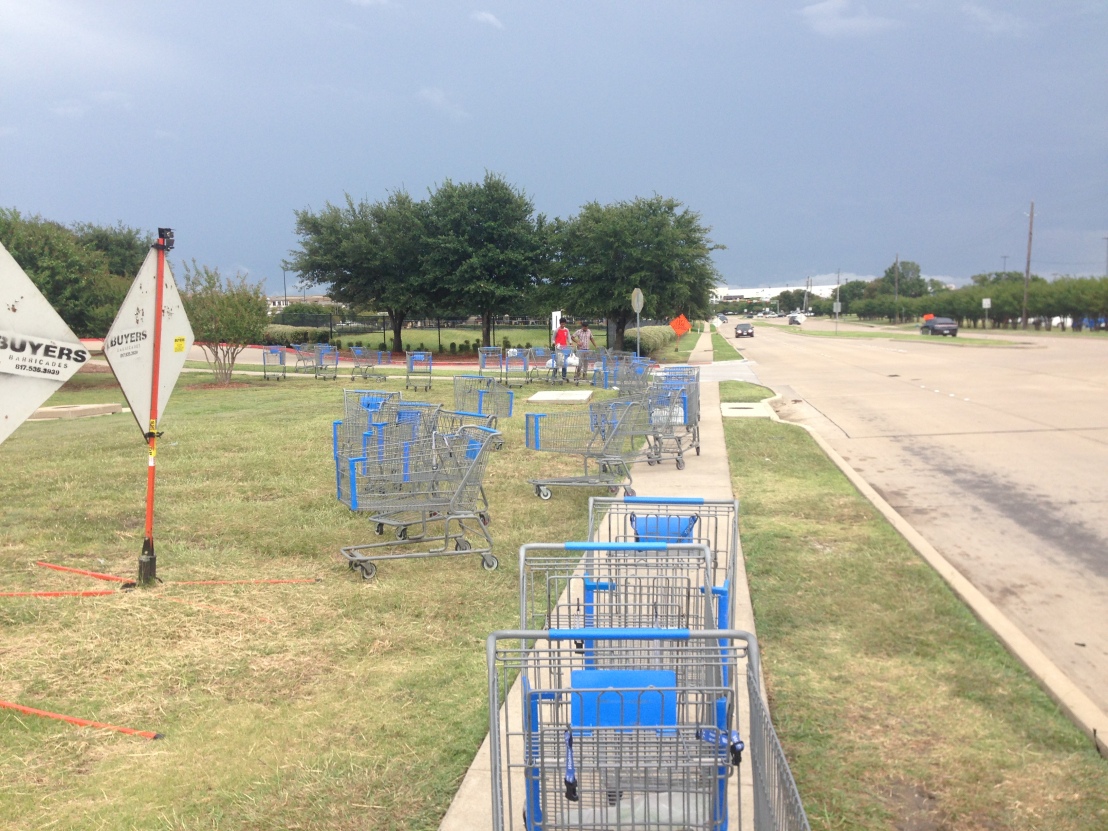 Above:  The bus stop at Walmart 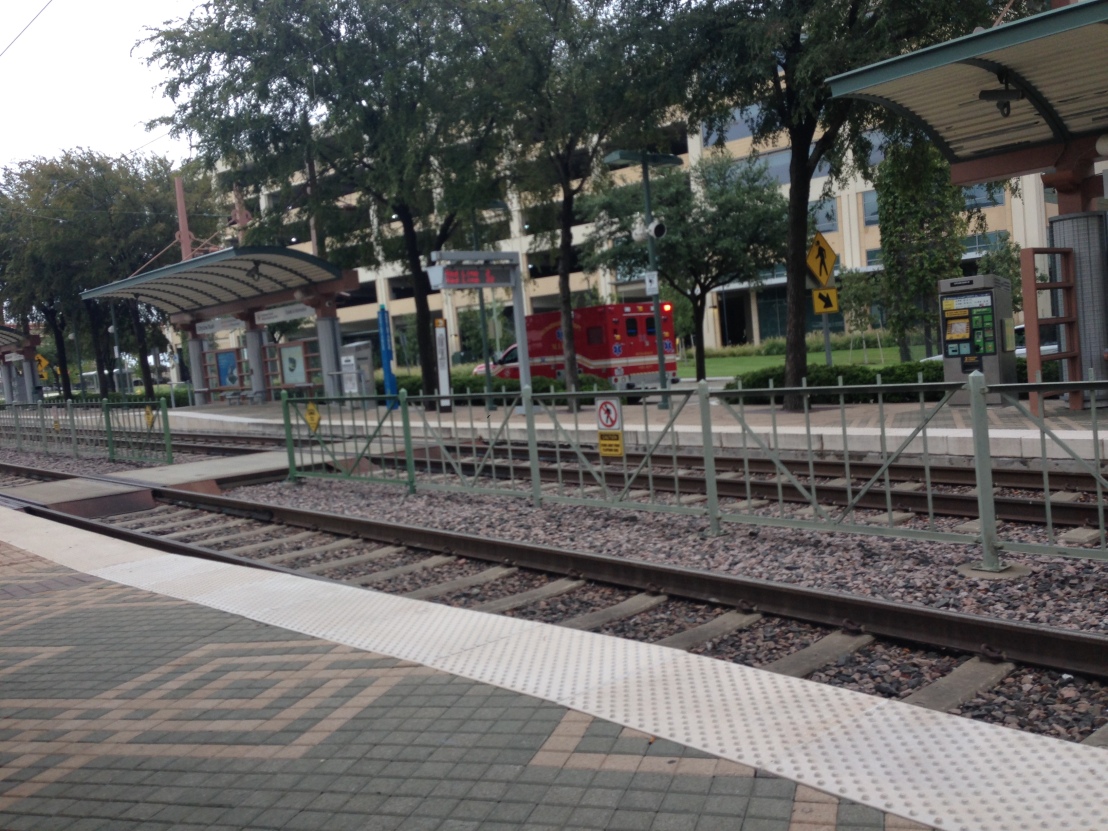 Above:  City Line / Bush Station, on the way back to Purgatory.  The emergency equipment was  there when I arrived for some poor commuter who somehow fell and was trapped between the bench and the partition that you see under the awning at left.  I didn’t rush over and photograph him, since I am sure he was dying of embarrassment, in addition to the nasty bruises I noticed as they put him in the ambulance.

There is some good that comes of this unwilling visit to Purgatory.  Mechanics replaced the duct taped improvised oil filler cap that I made from a fish oil pill bottle with a real oil cap and replaced the lost oil – five gallons of same. They also repaired the tractor suspension airbag that was leaking.  While I was in safety class and getting my blood pressure checked, they replaced my cracked windshield.  They transferred the EZ pass for tolls and the Prepass indicator for weigh stations to the new windshield.  One particular windshield-mounted item did not make the transition and I won’t miss it one bit.     (Update:  Since I am no longer employed by Stevens Transport I can tell you that the item in question was the “1984 – Big Brother Camera” (84BBC) that watched over me for those months before the windshield was replaced.  I did not mention it before because, in my Paranoia, I imagined that Stevens might read my blog and call me again to Purgatory for a replacement of the 84BBC.)

There was also a problem with the air-suspension seats, which tend to leak down while the engine is off and leave the driver looking eye-level at the steering wheel.  They did not get to that problem of the leaking seats but I can live with those.  When the engine is running the seats rise to comfortable height.  It would have taken longer and I needed to get on the road to actually earn a living.

On Monday, after all my assigned tasks were complete, I received a load assignment to take bottled soft drinks to Denver.

4 thoughts on “Once More to The Vestibule of Hell”