Sunspots have been studied for over 400 years by such notable scientists as Galileo. Many earlier observers had noticed that the sun was occasionally marked with darker spots. But, Galileo spread the word about sunspots and many of his contemporaries subsequently took up regular observations of same.

Right here is where I will repeat a warning that you may have heard a hundred times before: Do not look directly at the Sun and especially DO NOT look at the Sun in a telescope. The only exception to that last part is where a Qualified Astronomer is using a proper solar filter or is projecting an image from a telescope onto a screen.

That Galileo made use of a telescope around this time was strictly coincidental. Observations of the Sun were done during sunrise and again at sunset when it is possible to notice large sunspots with minimum damage to the eye. The sunlight passes obliquely through the atmosphere and is very much attenuated.

An image of the sun can be projected by a “camera obscura” which is essentially a darkened room with a tiny opening – literally, a “pin hole”- through which the sunlight enters. For reasons we won’t go into here, a pin hole acts like a lens and focuses light. By careful placement of a screen of cloth or paper, a focused image appears, large and bright enough to sketch.   The astronomer Johannes Kepler was known to have used this system to view the sun. In an interesting side note, Kepler thought he was seeing the planet Mercury passing between the Earth and the Sun, instead of a spot on the sun itself. Had he checked on the following day, he would have seen the same spot and because he knew that a Mercury transit would not last a day, he would have seen his error.

The method of projecting an image from a telescope onto a screen was developed by a protégé of Galileo named Benedetto Castelli.

“It was Castelli who developed the method of projecting the Sun’s image through the telescope, a technique that made it possible to study the Sun in detail even when it was high in the sky”. (1)

The following quote explains a bit about the “Sunspot Number” which was established as the metric of sunspot activity.

“Continuous daily observations were started at the Zurich Observatory in 1849 and earlier observations have been used to extend the records back to 1610. The sunspot number is calculated by first counting the number of sunspot groups and then the number of individual sunspots.” (2)

I would be remiss if I did not include actual images of sunspots with this discussion. Figure A shows a recent image of the sun taken by the Solar and Heliospheric Observatory (SOHO). This is a NASA space probe that orbits between the Sun and the Earth constantly monitoring the Earth-facing side of the Sun.

By the method described (Count the groups and multiply by ten then add the number of individual spots), I would estimate the sunspot number to be between 35 and 45. Don’t quote me. I know there are limits to how small individual spots can be and still be counted, but I don’t know what those rules are.

Figure B shows an image of the Sun during the Cycle 23 Maximum.

I am not sure of the origin of this image, it may not be from the SOHO probe, but in any case, it illustrates the difference between high and low sunspot counts. Again, I don’t do this for a living, but I would guess the count here to be well over 100.

The solar minimum continues unabated.  This count is obviously zero and is typical lately.  Some spots from the next solar cycle have shown up, but they don’t last long.  In this image, the count is zero.

The following graph confirms the continuing solar minimum, but requires some explanation.  For the complete version, go to the SILSO Spotless Days Page

For the mercifully short version read my explanation,  below the graph.

The solar cycle, in all its years of observed activity, has had (arguably) two types of cycles.  Those with large peaks and short minimums between – and those with small peaks and long minimums between.  The graph above segregates the two types as averages (the solid red and blue lines) and plots the number af spotless days accumulated in the current cycle (solid green line).  The dotted pale blue and magenta lines are the “standard deviation” plots for the low-peak minimua (cyan) and high-peak minima (magenta).  “Standard deviation” is what science nerds say instead of “what is reasonable to expect”.  As you see, the current Solar Minimum has made it obvious that this is  a major  departure, not just from the big-peaks variety, but also it is the outlier from the big minimum/low maximum cycles.  In short, like nothing in living memory.

Summary:  Confirmed: Expect colder temperatures for the next decade or three.

The following is from the NOAA Space Weather Prediction Center

Below:  The latest is still from Dec 2019.   Your humble narrator predicts that the double peak will again show up. – no doubt with greater separation as indicated by the last 3 cycles. (see figure D) 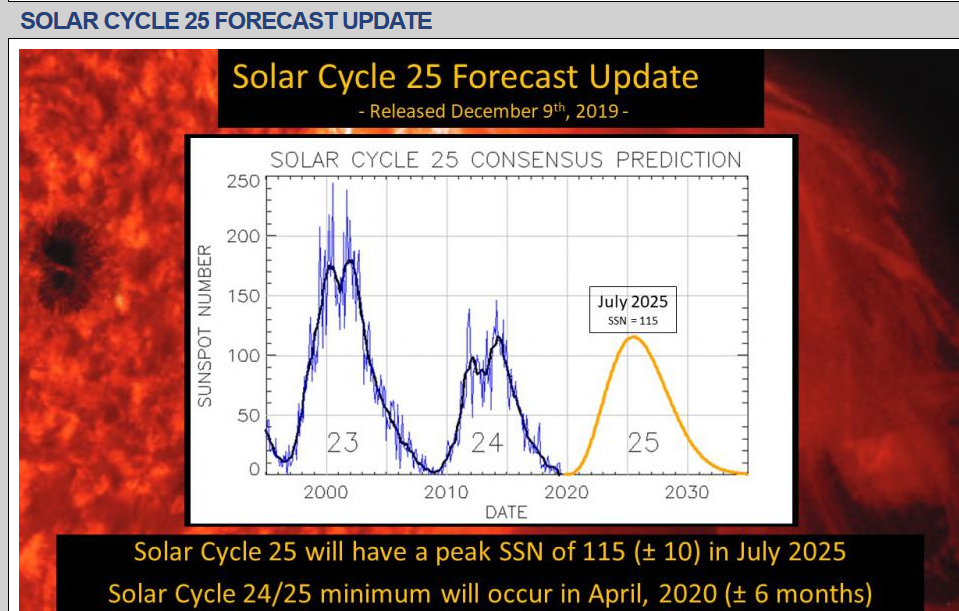 The following prediction by  Irina Kitiashvili at the NASA Ames Research Center  predicts even less activity for Solar Cycle 25 – the least in 200 years.  It turns out to be a bit before the NOAA prediction, but not by much. 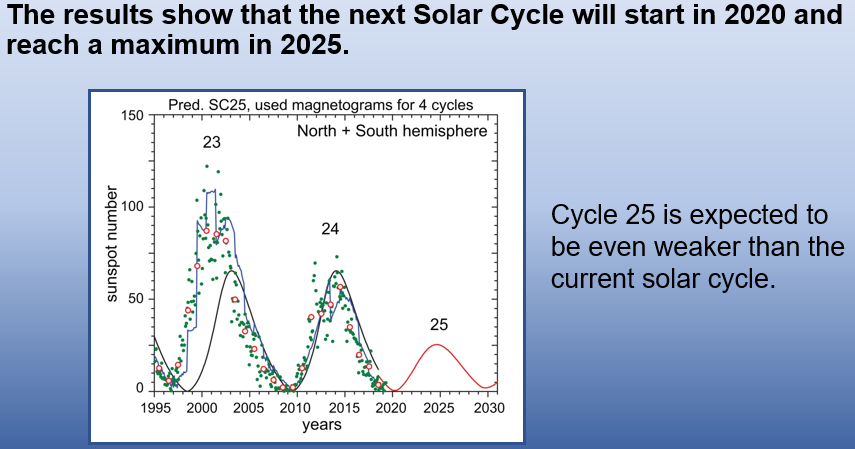 So, the “experts” disagree.  But, there is undoubtedly something unprecedented going on.

Figure below shows the accumulated sunspot numbers over the last 400 years of solar observations.

It is ironic that Galileo took an interest in sunspots and popularized such observations just in time for the Maunder Minimum when sunspots gradually became rare phenomena. The Maunder Minimum is associated with the Little Ice Age, when weather was cooler than today. The numbers of that time are yearly averages due to the sparsity of observations. From about 1750 onward monthly averages are plotted – results of sustained, systematic observation. The Maunder Minimum is still a valid conclusion, but the data cannot be said to be “high resolution”. The later Dalton Minimum is much better defined and typically associated historically with “Dickensian Winters”. In recent years, those types of winters are returning to England.

Magnetism and the Climate Connection

It is the changing magnetic field of the Sun that drives the existence or absence of sunspots. The Solar magnetic field changes on a long time scale and with different periods of oscillation. The most obvious of these is an eleven-year cycle that dominates in Figures C &D. The magnetic properties actually reverse in polarity in each new cycle, which makes it a twenty-two-year cycle in reality. Periods of high sunspot activity are associated with high magnetic field strength and a dearth of sunspots is an indication of low magnetic intensity.

As indicated by the note in the seventies, periods of lower terrestrial magnetic field strength are associated with colder weather. This effect has been explained by the work of Henrik Svensmark (6) who demonstrated that magnetism effectively blocks cosmic rays. But, when the field strength is low, the increase of cosmic rays makes cloud formation increase and global temperatures drop. Now that the Ap index has dropped to unprecedented lows and the global temperatures have failed to increase as predicted by many, this association would seem to be confirmed.

The fact that ”official” temperatures have not actually dropped may have something to do with the manipulation of those datasets by certain individuals who have reduced the number of weather stations averaged from over 6000 to about 400 and shifted the average latitude of those stations from that of Oklahoma City to that of Hawaii (5). Please note that before they began eliminating stations (circa 1975), the average was indeed, dropping! See figure F.